Should be a giblet freezer of a game.

Will it even go ahead?

The pitch itself could probably cope with a direct nuclear strike, never mind The Beast of The East, but what about the surrounding streets? Imagine the Guards will have something to say there.

Emergency management committee are meeting every morning this week with updates from Met E. I’d say the guidance will be taken from there. I’d say it’s 50/50

Emergency management committee are meeting every morning this week with updates from Met E. I’d say the guidance will be taken from there. I’d say it’s 50/50

The Healy-Rae’s will find some imbalance there, yet.

but what about the surrounding streets? Imagine the Guards will have something to say there.

Be surprised if it does go ahead if this beast from the East is so bad. But sure if it’s anything like the beast from the west Aidan o Shea we don’t have much to worry about.

All joking aside for the safety of players and people who are hopping at the thought of watching Dublin v Kerry they should probably postpone. Neither team are going to be majorly impacted at this early stage of the year

But you’re from Ballymun South East, are you not?

The Mobhi Road Crips could teach the Kinehan’s a thing or too.

But you’re from Ballymun South East, are you not?

Irish Rail tweeted earlier that trains were suspended, due to gurriers trespassing on the line at Glasnevin. Buncha bleedin’ knackers up round that way !

Malahide and somewhere else yesterday. My bet is it’s their own workers and they just dont know it …

I’m also hearing that the Gardai say they will call off the Dublin v Kerry game if the usual single car load of Kerry supporters can’t travel.

A game in Croker under lights with snow and a return of the yellow football, the stuff all photographers dreams are made of!

Can’t see match going ahead, there are no matches following week it will be rescheduled for then

Can’t see match going ahead, there are no matches following week it will be rescheduled for then

Think there is Camogie in Croke Park next week though.

DCB just tweeted that the Kerry game is still going ahead, as scheduled. For now, I suppose.

Snow day at #CrokePark as the #BeastFromTheEast hits the country 🌨️ https://t.co/gqsaXxeqvW 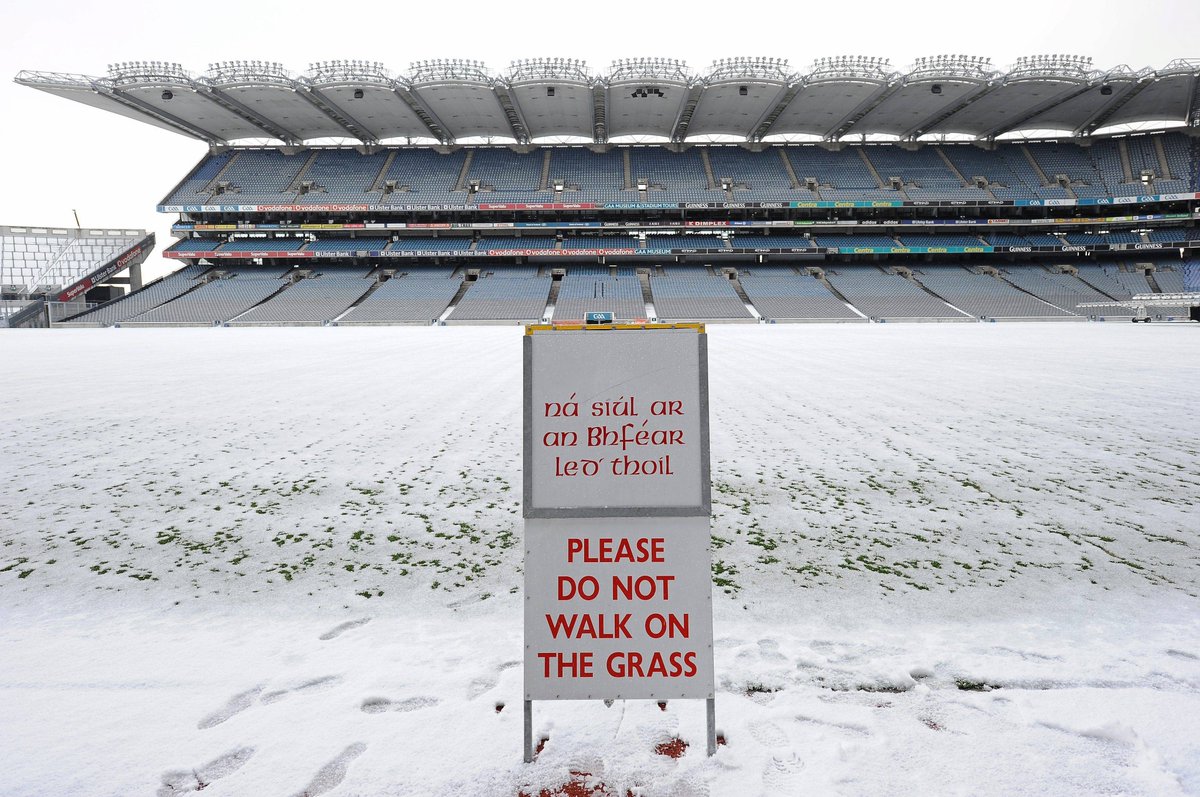 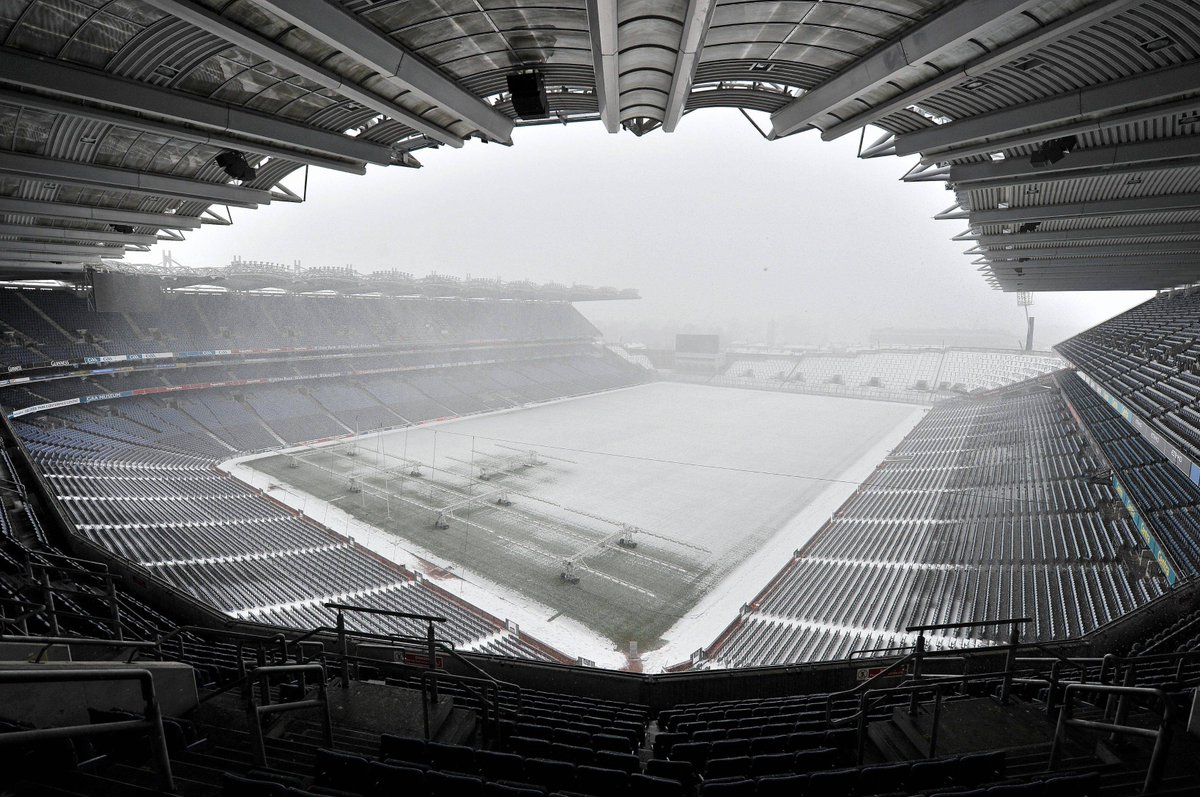 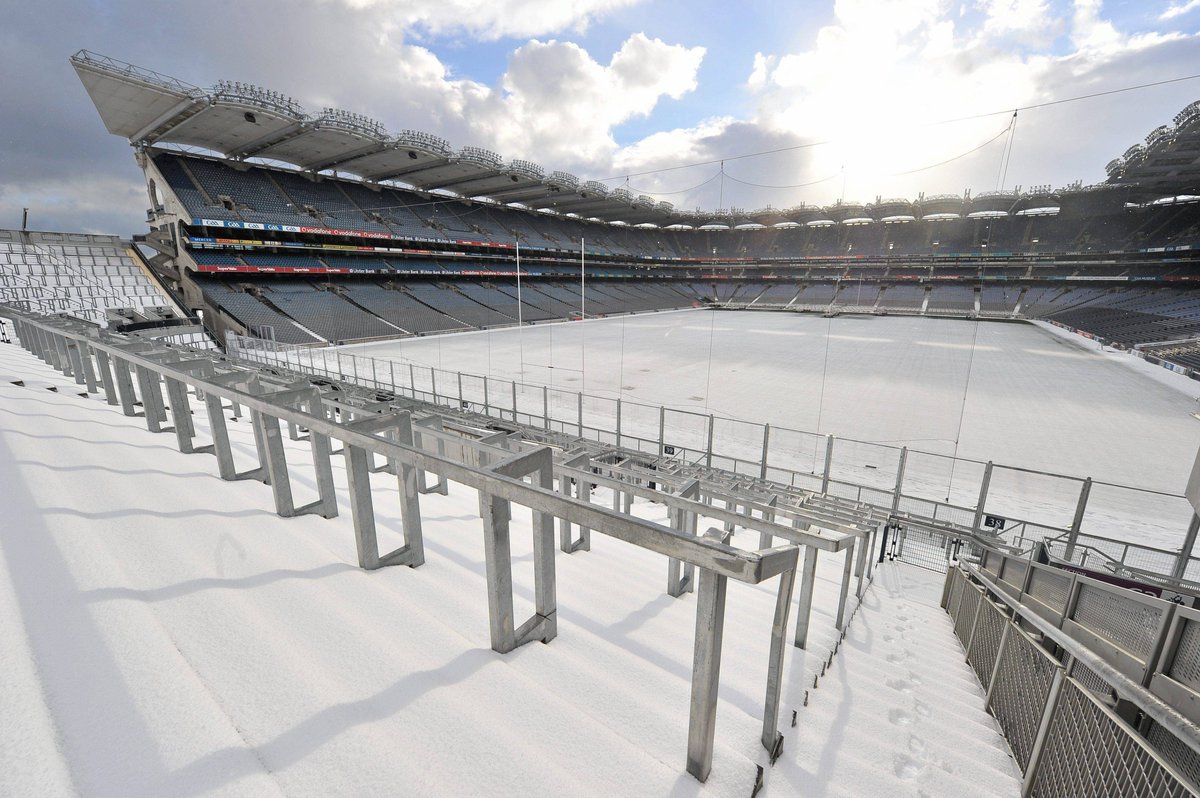 Good bit of snow there now

No all it seems. Part of the pitch has a white plastic cover on it to aid growth. The under soil heating will have the pitch in perfect condition on Saturday,. It’s the Hill and the steps in the stand (lower) and the streets outside that might be the problem.

Due to the inclement weather Saturday’s national orientation day for the Healthy Club Project in @CrokePark has been cancelled. Notification has been issued directly to all 150 clubs involved through the relevant point of contact, including details of the alternate plans.

But the football in the same venue is still on!

Will they just call the jaysus thing off ffs.

Would be torture in this weather , it’s normally cold enough as it is