Paths to the Final

Don’t remember the uproar when Cork hammered Cavan in the All Ireland semi final.

Hopefully they can manage this without any major fck ups.

To me they don’t seem as tuned in as last year.

Very difficult to make a serious case when we haven’t seen the semi final. Galway might have been very poor, Cavan shouldn’t be Senior and could have lost to Kerry too. Regardless I do hope this is Fitzgerald’s last year and he sticks to it.

Like the men’s under 20 football final I see this as a complete toss up. Maybe Cork favorites by a point going into it just.

Is @Ohm_Flatley the artist formerly known as @Ohm

He will probably dance around us with his stats and knowledge of unusual games.

Sinead Aherne back in training.

The St Sylvester’s forward picked up the injury in her side’s All-Ireland semi-final victory over Armagh.

You’d never think there was an All Ireland final happening on Sunday. Disappointing but not surprising.

The main reason the Lgfa and camogie play them a week after the football /hurling . They get swallowed up when played the same week .
Without being at games this year it’s hard to tell how dublin are playing .
Donegal and Armagh were good tests for us . Both counties especially Donegal believe they should be winning all Ireland’s . Cork easily beat Galway . How much of that was down to the Galway prep ? Personally I think very little .
I’m hoping Dublin can pull through . But I’m worried .

Honestly I feel similarly about Cork. Never looked really impressive against Kerry, beat the poorest senior team in Cavan and I’ve only seen highlights of the Galway game but they seemed to up against poor opposition.

You could look at it as Dublin have played two tough games that Cork haven’t or that Dublin have struggled. I’d have Dublin as favourites purely based off the fact that they’re champions. A lot of the Cork girls won’t know what it’s like to win an all ireland on the field although some have 5/6/8 medals already at home. It’s very hard to call.

Although I’d love Cork to win I’d be afraid we’d see another year of the manager which would be very disappointing for the clubs and their championships.

What do you mean?

Dublin have more experience and as mentioned have had tougher road. Very little game time to go on but from what iv seen I dont see how Dublin can be wrote off, they have won 2 tough teams . Cork played some average teams and won well with little test. Cork also without Scally this year and Dublin with some girls back. The two bring the best out in each other and will make for an exciting contest

Nice to see Nicole Owens smiling and in good spirits after her injuries this season ahead of the match with Cork. 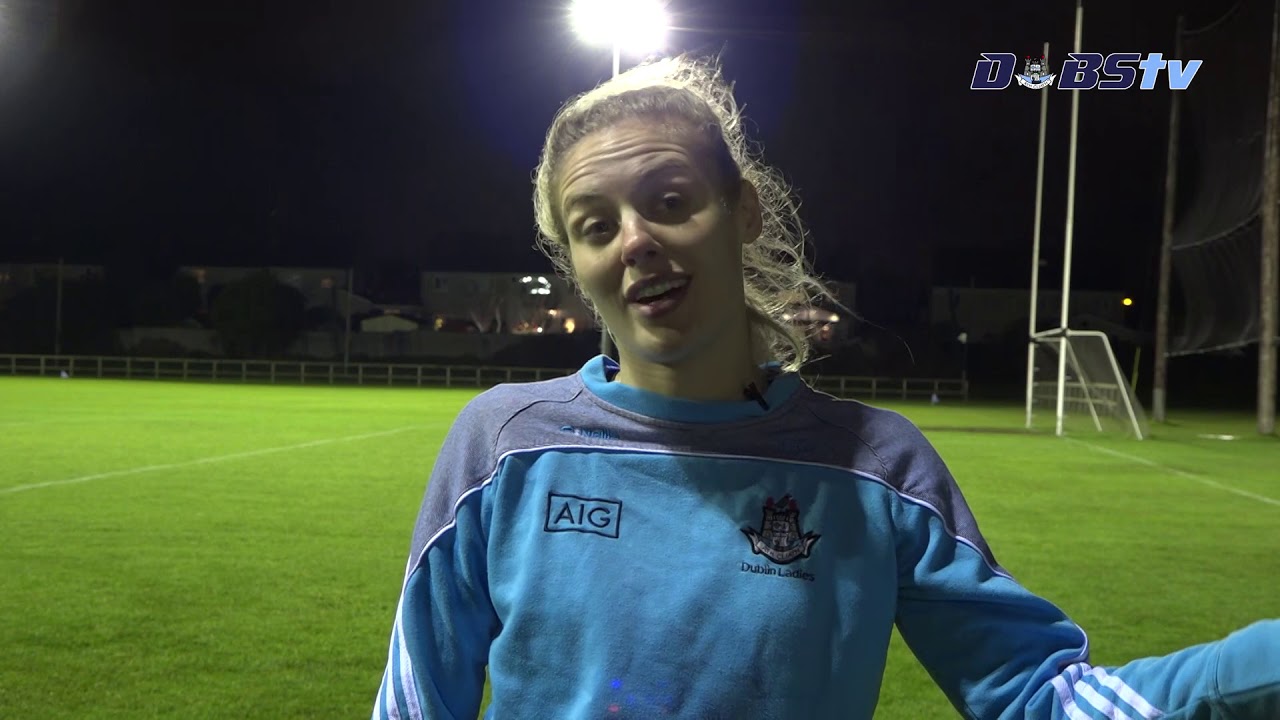 Personally I’m really looking forward to this game. These two sides have thrown up some really entertaining contests over the past ten years. I think this weekends one is quite difficult to call with it being such an unusual championship. It’s hard to gauge either teams real form and decipher who’s heading into the final in a better position.

From a Cork perspective it’s been unspectacular in the last 2 games (excluding the Cavan one). The O’Sullivans are key players and central to all we do well going forward and Finn is a sharp shooter who will need minding and Noonan can be deadly with only half a chance. A big boost is having Phelan back at 3 after her stepping aside last year. I’m not sure if she’s back to 2018 form yet though having damaged her cruciate in the spring. We have a litany of forward options on the bench, many of whom have multiple minor all irelands in their back pockets but haven’t tasted success at senior level. O’Shea who I expect to start at wing back is still in school. On the other hand you’ve the O’Sullivans with 13 all Ireland medals between them. Overall this is a relatively inexperienced Cork team though.

Dublin have now tasted the feeling of success these past three years and have learnt how to win. From what I have seen they seem suspect defensively which is where we should look to expose them especially with the quality of some of our forwards. However at times going forward have looked very slick when fully in motion. I think Davey is central to everything Dublin do well and will need to be watched. Aherne’s fitness is a boost too. I’d imagine the past three weeks have been used to iron over the issues seen in the other games.

I would have Dublin as favourites. On the basis of being reigning champs and how comfortably they looked in last years semi final. Dublin by 4 but hopefully an entertaining game of high quality as the build up has been disappointing at best. 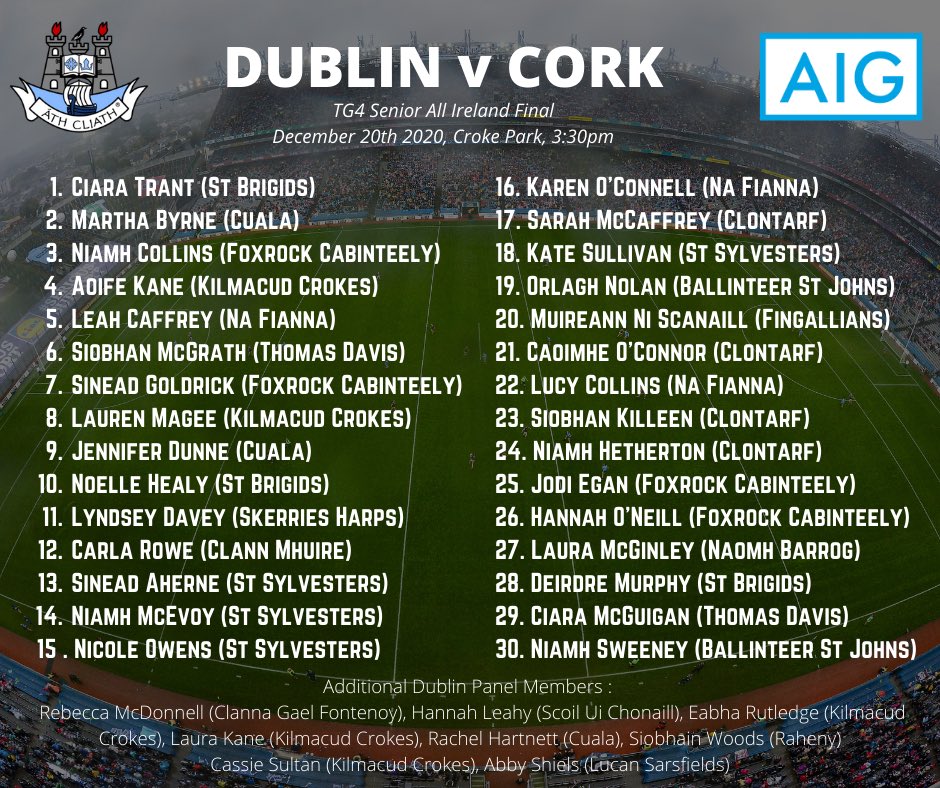 ❤️🤍AND HERE IT IS 🤍❤️ Manager @ephiefitzgerald & Coach @osheap1 and their backroom team have announced the @CorkLGFA Team to take to the field on Sunday at 3:30 in the @LadiesFootball @TG4TV All-Ireland Senior Final and it’s a unchanged Team from the Semi-Final win over Galway. https://t.co/OmBPIseohf 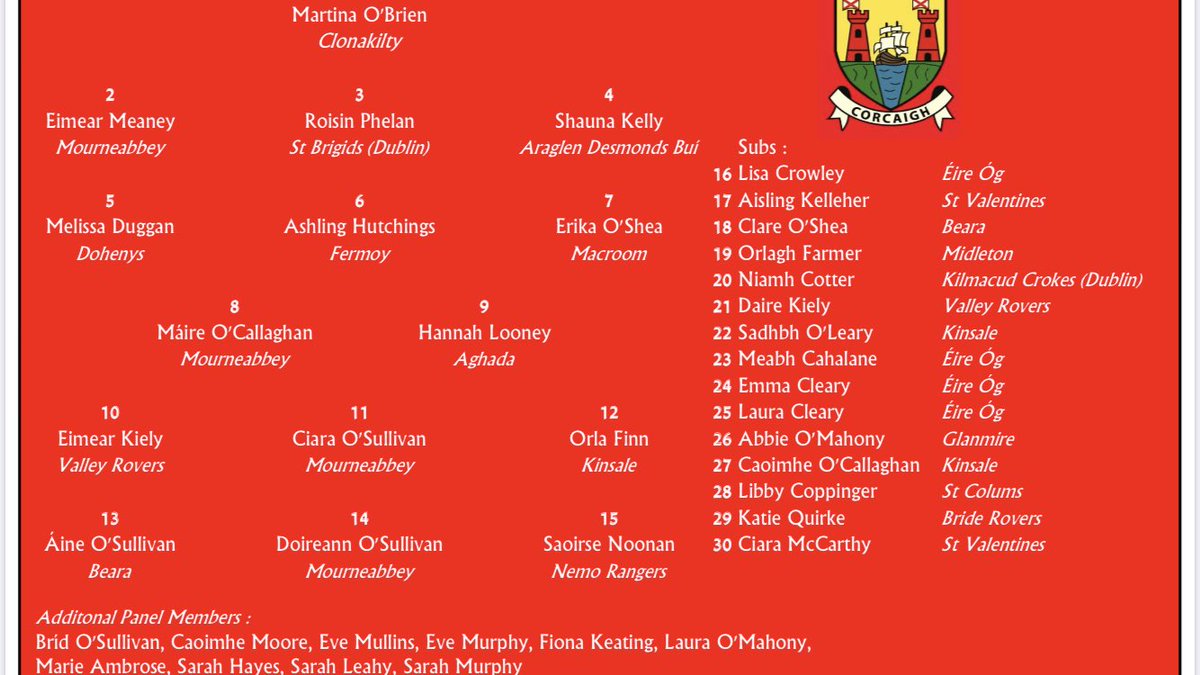 I think the Dublin ladies have extra motivation for this with it being the greatest LGFA county and their greatest nemesis in Cork for those 3 finals in a row. I know they beat Cork in last year’s semi but I don’t think they have done it in a final and this could be a monkey they need to get off their back.

They beat Cork in the 18 final