Comer should get one too .

Was at it all game . Should have got a black card for interference with the keeper

Let’s keep the discussion to Hurling only please. Wash that glorified athletics talk out of yis’er mouths with some liquor please

Hopefully two good games this weekend. I have a feeling Kilkenny might beat Clare. Limerick should beat Galway. 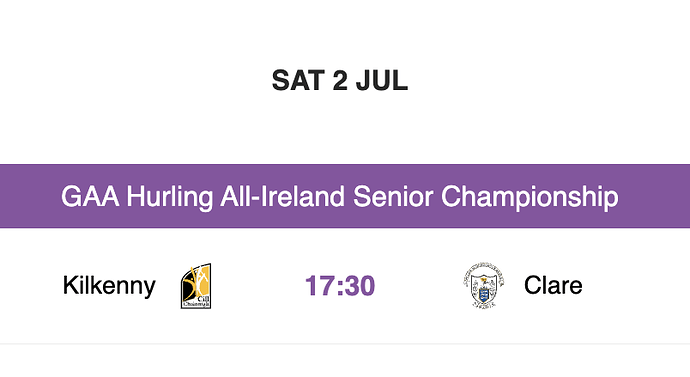 If Clare let KK bully them, that’s their own fault. With Lohan as manager…

I’d really like Clare to get through. They’re well able to mix it up.

Think we will get the limerick v Kilkenny showdown. But both games could go eithier way.nobody giving galway a chance but I think galway will really put it up to limerick.other game is hard to call.kilkenny have lost last 2 semis but have a good record v clare in croker but not outside croker.looked like clare and limerick would meet again after munster final but I dont think it will happen.

I wonder could Clare do a number on Kilkenny

Yes. I wouldn’t call it a number either. Would be more inclined to say Kilkenny could do a number on Clare.

I rate Clare as being better than KK. However if KK bring their hooking, dragging, holding, fouling, rule-breaking…er… ‘intensity’, Clare will need to match that. Otherwise, they could be taken down, like Limerick were in 2019. My fear is that Clare could get through this…but with injuries and red cards picked up. I’d love to see Clare, or Limerick do such a number on KK that Cody gets shown the door, plus or minus a handshake!

Butler likely the man to track TK based on his performances this year. KK have absolutely no fear of anyone and will relish the thought of being an underdog. Neither team to win my more than 3 but i’ll go with Clare but after extra time.

Limerick vs Clare final and Limerick to win by 5+

I don’t disagree but Clare have a tendency to bite back and I fear they could get drawn into it, will take a lot for them not to and hold the discipline. Looking at who the ref is, there will be no easy one’s so Clare will need to mind themselves

Kilkenny never have any fear of anyone …

Lost twice this season already in the championship

Exactly, man v man I’d prefer clare but I have the feeling Cody’s men could do it = Kilkenny “do a number” on clare.

Clare and Limerick for me.

Clare v Kilkenny is hard to call IMO, have a feeling after their league encounter that galway v limerick will see red cards and maybe a shock…

Galway have the size for Limerick but Whelan cannot do it on his own, up front. It will take some other Galway forward to have a ‘Shane O Donnell’ day, for them to win… by snatching it at the death. That is unless Limerick get a couple of red cards, which is not beyond them! My humble tuppence worth!

Galway don’t have the cojones

If they can’t beat Kilkenny they ain’t beating Limerick

Limerick be well up for this one after the league game