Sky games are Saturday, the 15th is a Sunday

Munster Hurling games (2) on RTE that day. They will probably object to live games on elsewhere at the same time.

This from Leinster GAA site

Gaago basically show any games that are not being televised in a given region, so the UK subscription can’t show any games being covered by sky or BBC, but should have coverage of everything else. For the home version add all rté and tg4 games to the list of what they can’t show.

That is not correct, no games are shown outside the UK and Ireland, but GAAGO only offered three football games this weekend outside of UK and Ireland , 6 were not offered . The year pass is a very bad deal at the moment unless you just want to watch any games, but if you want to see your county’s games it is a rip off, especially given that they don’t say what games they are offering at the beginning of the year.

Switched from 630 back to 5 as champions league final is on. Munster final is now 3pm. Makes sense to
try draw in a bigger crowd for both games

I sent an email to the gaago support staff. Both semis should be on there to purchase once the dates and times are confirmed officially.

Unless it gets added in the coming week it isn’t listed as of yet. Looks like only the currently planned televised games are there 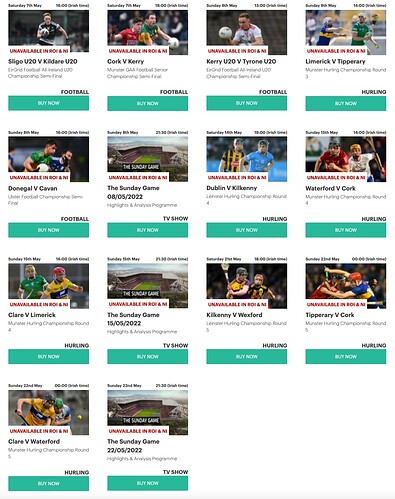 Yeah, that’s what I’m saying. The games don’t have an official date and time yet so they aren’t listed in the database. At least that’s what I was told.

As far as I know the games the have a fixed time and date, they more or less clash with the hurling matches which have been announced on gaago

Seems pretty clear at this stage the Leinster football semis won’t be on GAAGO, seems the support staff were bullshitting you , OHM

RTE have a hard on for showing Munster hurling matches. And nearly always on Sundays.

And then make sure it’s the first game on the highlights show that night ….

Leinster football semis won’t be on GAAGO, seems the support staff were bullshitting you ,

GAAGo have no control over what games are televised, thats up to RTE, Sky, TG4 and BBC.

Would we get a decent crowd in Croker this weekend? What about the Leinster final if its us versus the Lillies?

Get all the gaago games on my dodgy app and it’s less than the subscription to Gaago only for the year!

Do you cast that onto a tele?

No, loaded on the firestick. Top quality stuff, every channel you can think of and then some