That’s quite the injury list to be fair. It’s terrible timing for Colm Basquel to be injured.

wouldn’t be overly impressed with Ryan

He was certainly off the pace on Saturday. Looked to be carrying some winter timber but it’s early days and a lot of work to be done.

The whispers of Con going hurling are getting louder. If he does thats game, set and match for the footballers this year.

Could be game, set and match for the hurlers. Silver clouds and all that…

Just read online that the game is sold out . The site appears to be down. I’ve been trying on and off all day for tickets . Not impressed here, we’ve the hotel booked for weeks. Did anyone have any luck?

if ye get a ticket you’ll have to go about 6 in the mornin to get a seat in the stand, they Don’t like dubs in the stand in that kip

I know. We’ve been caught with that one before. We queue with the Kirry folk from about 5pm to get a seat in the stand.

you’ll more than likely get a ticket down there

Why would Con have played in a football challenge v Roscommon if he had any notionof playing hurling instead? I’d be pretty certain he’ll remain with the footballers.

You have to laugh at the rumour mill. No sign of him on the hurling dev panel playing challenge games.

All Ireland gravy train at football is over at that stage

If anyone has 2 spare tickets for the game, I’m interested . Thanks

Amended that for you

You have to laugh at the rumour mill. No sign of him on the hurling dev panel playing challenge games.

I think your man the number 23 who came on against Wexford the other night was Con. Moved very like him and you’d never know with the helmets these days.

Did they go on sale? I can’t find anything , nothing on dublin GAA Twitter

Just today. I’d been checking on and off last week. I heard from someone they were on sale today but the website kept showing technical errors and now the message is that the game is sold out. 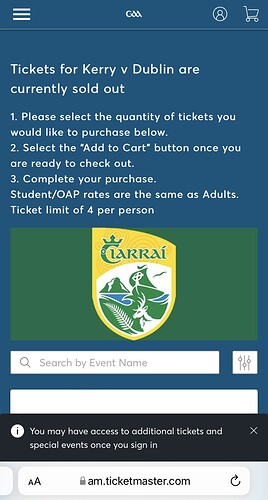