The US, Canada and Mexico have announced they will make a joint bid to host the 2026 World Cup. More: bbc.in/2oZE5L4 https://t.co/MLdk9FXtAY 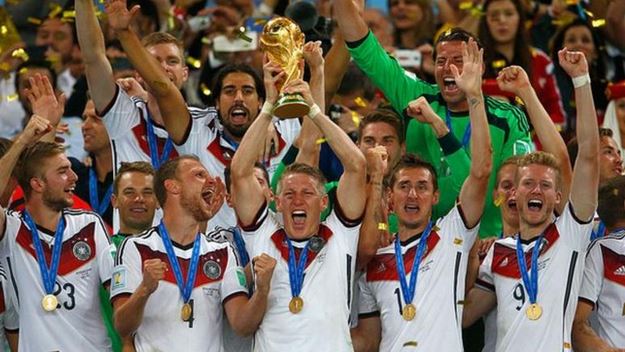 As expected a joint bid from the US, Canada and Mexico. With Donald apparently very happy that Mexico is on board.

Hard to see anyone else bidding for this bar an Australian/NZ joint bid.

2026 , two years if he gets another term to correct all the damage Trump will have done . I shudder to think what the world will be like then , if he hasn’t pressed the big button on the nukes by then …

2026 , two years if he gets another term to correct all the damage Trump will have done . I shudder to think what the world will be like then , if he hasn’t pressed the big button on the nukes by then …

Kerry will be 157 games unbeaten

48 teams in next World Cup … pure greed. Can this money driven saturation kill the goose that lays the golden egg?

Some spin from Mexico to Canada if you had to play in both venues!

Ah the green army will love it, hitch-hiking a bicycle for 8 lads with just a home-made tent for cover, lost looking for Little House on the Prairie. “That John Denver’s full of shit, Rocky Mtn High my arse!” The videos of singing to grannies and nuns at Niagara Falls, and the Rio(Ferdi)Grande will be legend. Kicking a beachball over the border wall, pissing into the Grand Canyon, dressed as leprechauns in the ancient Aztec ruins, chanting at a gay couple in a cave, “Are you Butch+Sundance in disguise?”, “give’s a pint of tequila bar hombre”, thousands of sombrero faces on the news when we get knocked out…

I got too excited!!

…and you just couldn’t hide it…

Who else is in the running? North Korea will probably get it after this morning.

And the winner is:

nother victory for the donald!

Well I have mixed feelings. I’m happy we got it but I really wonder when it will be in Africa again. I guess the main reason against Morocco was safety issues.

At least ya don’t have to worry about qualification !

surely Mexico has to have safety issues too?

Does that mean that 3 teams are automatically qualifed already? how many teams do CONCACAF send?

I think its going to 48 countries for that WC , not sure about Concacaf.

Nah was more infrastructure issues that cost Morocco. They’d have had to build at least 9 Stadia from scratch. Majority of the stadia in the US-Mex-Can bid are ready to go already