The G Men’s league to lose on last years evidence

Whitehall were v unlucky not to go up last year, it’s their second team, they’ll be strong again.
Ballyfermot & Brigids prob best of the chasing pack from last year

Did Judes not go down in the end? Playoff? I could be wrong

Strange the way they have the 3 teams that went up from last year on this. Just an error?

Did Whitehall not go up by the playoff? Correct me if I’m wrong but I thought they best odwyers in the Playoffs last year ?

Last day for entries to competitions is tomorrow 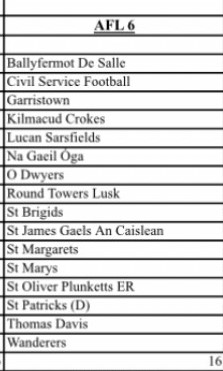 Ballyfermot be much nearer the top than that I’d say

O’Dwyers very impressive last season, fully expect Garristown to kick on too, six or eight others who will all expect to do very well. Could be a very competitive year at the top.

I see they’ve 2023 in the drop down menu for fixtures now, no fixtures yet, the County Board love a tease…

Na Fianna now listed in this Division. Seemed to have replaced O’Dwyers who are gone to 5.

So is that the Na Fianna team that were afl5 last year?

I would think so as have team in 7 as well.

They were relegated last year