Did yous not have two in AFL2 around same time too ?

Amazing having 4 teams in top 4 leagues!!

Could have sworn I recall playing their 1st and 2nd team in same year AFL 2. Supple had just come back from England. Then again my memory not what it used to be

No never remember that . They were in the same championship once but never the same league

Yeah in 2009 we had 2 teams in AFL 4 . I think that is the year one lost a playoff final to Sylvesters by a point . The other team missed out on playoff by a point losing 3 out of last 4 games

Drawn game between BDLS (10) and Croí Ró Naofa (1-7) out in Killinarden tonight. Croí with a late goal and a point to draw level. Great to see them fielding for the season, long may it continue.

Lucan beaten so Judes have won league now? When will we see the open top bus for the celebrations?

Jude’s seem to start the league flying but only got over the line in their last 4/5 matches in low scoring games. Fair play to them sound lads when we played them but don’t see them winning Championship if they are in a higher one against Div.9 teams unless they load the team with players from teams above.
GC great result tonight, they could beat Jude’s in League & Champo this year.

Can’t believe after a full league run and it’s only the top 1 in South & North that play each other, sure Jude’s just with Div.11 South and leave it at that

GC great result tonight, they could beat Jude’s in League & Champo this year.

Ah great win for us tonight. Could’ve been closer as Lucan missed a pen with last kick of the game.

Gonna be crippled for a week after that match.

I just think they’ve been short on numbers in the last couple of weeks. They’ll get their act together by the time championship comes around.

Well, it won’t be the freedom of South Dublin County Council, given their ignorance of the GAA.

Am I correct in saying that it’s GC’s second team that Jude’s will be playing in Championship, if the GC 3rd team can turn Lucan over and Jude’s just beat Lucan surely the second team would be too much a jump up. That 5th Championship is with teams in 7/8/9 so it’s a big step up, especially if some of those teams have fringe players from Div.5/6 teams in it.

The 6th South Championship is wide open, all to play for between the rest of us.
Brigids & Lucan (if they come out of the group of death) must be favorites 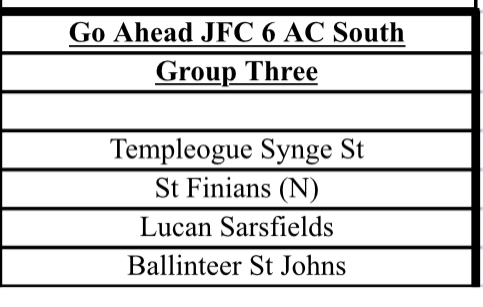 Dublin Junior 5 championship is nearly all teams from AFL 10 . Only three teams higher than AFL 10 in it Clann Mhuire, Clann Na Gael and St Pats . St Pats will be AFL 10 league next year

I also think this is Good Cousels second team not 3rd