Hard to know what will happen, if it will be teams having to play 3 games in a week or if they push out the playoffs by a week 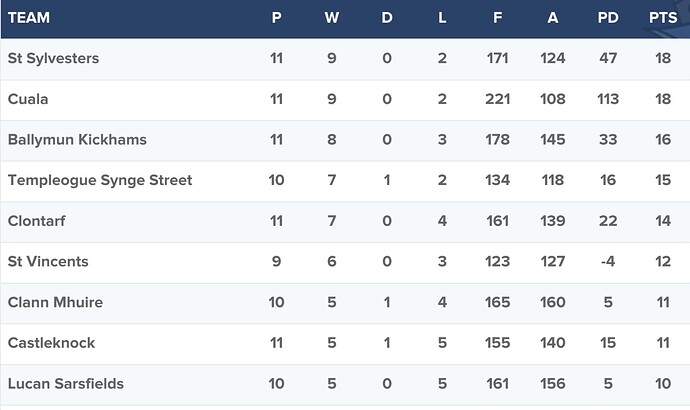 All very tight! Anyone from Lucan up probably has a chance of playoffs, albeit from Vinnies down its an outside chance

Some result for Man O War picking up a point away to table toppers Syls!

Massive result for both Man o War and Cuala that, Syls have now dropped points in two of their last 3 games. This final day of the season game between Cuala and Syls looking more and more interesting.

3 games to go now for a lot of teams now, can’t really see the bottom 4 changing but you never know, some of them have picked up points in fixtures I was not expecting at all. Raheny ran Vincent’s very close today and haven’t been getting walked over as much as earlier in the season so they might manage a minor miracle in the last few games.

The top end of the table looking very hard to predict and a lot of them still have to play each other. Still have to see:
Vincent’s v Clann Mhuire
Ballymun v Clontarf
Sylvesters v Ballymun
Clontarf v Cuala
Cuala v Sylvesters

A lot can change with them fixtures, very hard to call. Whoever wins between Vincent’s and Clann Mhuire will probably fancy their chances of getting into the top four depending on how those fixtures above play out. Templeogue the only team around the promotion area that has played everyone around them at this stage.

Yeah to paraphrase Tony Holohan, the next two rounds are crucial! Two or three massive games in each round. I think Syls are just losing form at the wrong time, its likely by the end of the season they’ll have lost to Clontarf, Cuala and Ballymun

Cuala have 2 tough games left but I’d fancy them to won 2 out of 3 anyway which gives them the league.

Ballymun seem to be getting stronger every week now, but again have a very tough run in, I’d expect them to beat Man O War but its a toss of the coin v Syls and Clontarf, I think they’ll need maximum points if they want second spot

The battle for 4th is the big one, its really going to come down to when the back matches are played, if they squeeze them in over a very short period its advantage Templeogue I think, probably least impacted by Duals and only one back match v Vinnies. They are both in control of their own destiny, good place to be, but this time of the year, I’d rather already have the points on the board

Any score MoW Garda this evening ?

MOW were winning handy into the last couple of mins. Not sure of final score.

That result probably relegates Garda, they have Syls, Vinnies and Raheny left to play, hard to see them winning all 3