Ravens beat Whitehall by 3 or 4. Good game. Congrats to Ravens. 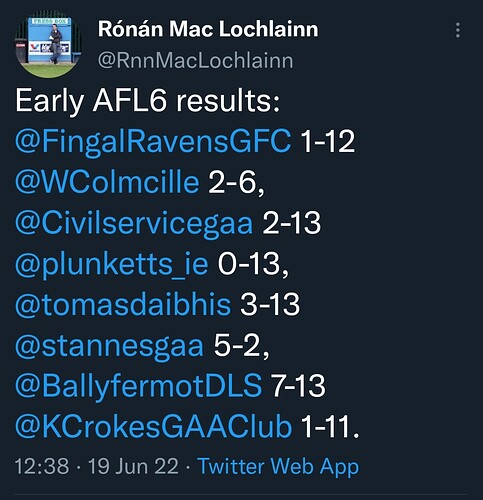 I assume Donabates games where postponed this weekend?

Anyone know when the back matches will be played? Crokes have one and Lucan and Annes have two each if I’m not mistaken? Last round of league on the 12th July, promotion and relegation play offs to be played, and Championship starting 3 weeks later after last league game?

Genuinely can’t believe that fixtures plan is in the shit again? Who would have thought it?

I would reckon they wont be played unless they are meaningful. By that I mean for any of the teams to be in for promotion or avoid relegation

That’s the thing. They all do have a consequence I think, down the bottom half.

St Annes ones do anyway at the moment. If the gap opens up anymore between them and the rest then they may not be played though

Be some interesting conversations between managers and dual players I imagine!

Not helping the dual player conversation.

Cannot possibly infringe on the Hurling league or Championship to complete a football season. There would be murder, and rightly so.

No, and youll generally find players that play both love doing both.
Its the people/coaches

in either one sport or the other like sole control and players forced to choose.

In fairness Lentini, I think all players and coaches want is a schedule that allows for both hurling and football to be played out in a season that doesn’t last 11months between a very bog standard and rushed pre season and even the end of a group stage of Championship

Congrats IN order for the Ravens i think?
Well done lads if that is the case

Yeah don’t think they can be caught now at this stage. Play offs and other promotion spot could be all but sorted on Sunday morning

Ye O’Dwyers win wraps that up. Other end of table bit mor complicated.