Down on fixture Calendar as Sunday 17th July 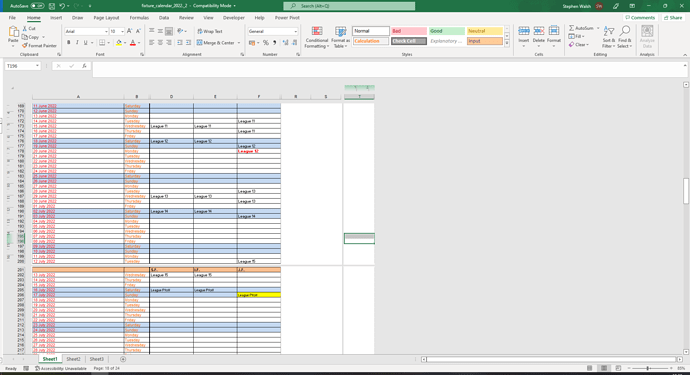 Should be a good one.So many teams could still make it

Hopefully we’ll be in the mix

Play off final is 2 days b4 the hurling championship, thats an awful pisstake

Massive games tonight , Syls playing Mary’s at home and Gales home versus Boden . Could go either way too hard to predict

Standard of junior in Dublin has gone up massively imo.Long gone are the days of these lads meeting up only on match day

What championship are James gaels and ciarans in? Is it inter

Both in Junior Championship. Would say both will give it a serious rattle as well.

James gaels at home will more than likely win. From what I hear boden not interested in promotion and have a good few away. Would be good to see gaels promoted

Chiarans spanked mearnogs.anywhere from 3rd (possibley 2nd if gales ■■■■ up) to 8th could get playoff

4 down with 15 to play and we hit the cross bar. Went up the other end and gotta goal and are heads dropped. Then the hurlers came on and used us for fitness training lol. Best team in the league on there day i think.

ya’d swear they emptied the bench. They had to bring a lad back on they were that short numbers

Any dual lads who were fit and available played tonight.

Do many lads in craobh play dual or just the few and hurling is priority?looks like they’ve a handy 2 games anyway and will just need a result or two to go there way.

Probably 10 senior panelist’s when all fit. Couple of junior hurlers and then a few young lads that play just football

Whoevwr he was he was a flyier lol. Gave us a lesson tonigt. We havent trained once all year its a joke tbh and fitness showed tonight.

This the lad in the dublin shorts? Forbes, would normally play in the backs, just put on for a few mins. He’d be fairly fit alri. Scoreline wasn’t a reflection of the game as a whole. The lads would be gearing up for champo so fitness would be peaking and showed in the last 10

Any result from garritstown? If they win they win league yes ?