any interesting results? or is it just shadow boxing until May/ June when we can see who has the best panel depth and ability to adapt to the faster ball and dry pitch 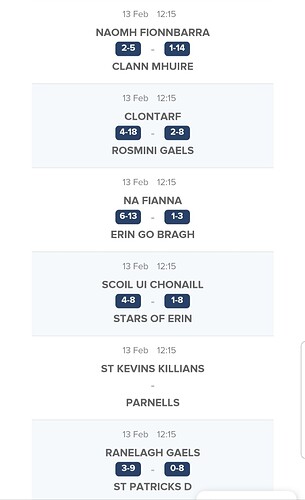 Same for scoil, that their 2nd team? They were very strong in this division a number of years ago. Also heard they have a strong contingent of country players though not at the level of Judes.

Pats bet stars of Erin by 2

Castleknock seem to have an outrageous panel…
looking at some results it seems they pack it against certain teams, especially after their intermediates play the day before…

Perils of playing Clubs with a few higher teams, they’ll always have one or two excellent players eligible to drop down and are probably bringing very good minors through into lower divison teams, that in a smaller club would go into the first team

Won with a score line that’d make you wince! Didn’t help that Kevin’s got a man sent off after 15/20 minutes.

Been two years without league promotions now and for a club like castleknock that’s gonna seriously strengthen teams, particularly at this level. I believe a fair few of the minor teams that would have joined adult level over the last two years were reaching championship finals at various standards. Certainly one of them would have been the group that won an all Ireland feile a few years back and think they continued to keep a high standard and had big numbers right up until the end of minor. A lot of them lads would be with the first and seconds I reckon but not all of them.

Pair that with a few older players looking to take a step down and some lads committing to hurling following the championship win last year, adds up.

majority of clubs have teams up to U17 at least… the problem is keeping them on playing.
Lots get disillusioned with it if they are not getting near senior side/ not getting game time or just pick up bad habits but i think underage success has a lot to do with it, very easy keep it up when you are in a strong club with a winning mindset, and unless your club has the resources to put in a social team for the oulder lads, they tend to step away. No bother for Castleknock to have junior A/inter standard young lads in lowest team and that should be looked at but the issue of no promo/relegation the last 2 years strongly contributed to this situation too

8-30 to 0-3. Kevins Killians would have a strong team unless lads have stepped away.

No Ref turned up for Parnells v Ranelagh tonight, disappointing for both teams

Any idea if the home team got in touch with the ref beforehand? Something similar happened in Div 11N a few weeks back

bit of a disgrace alright, both teams middle to lower part of the table and needed the points to get challenging, how have Finbarrs got 8 games played and KK only 5? wondering if that is a mistake or what, good old division 8 football

If both clubs make contact with the Referee beforehand, as asked to do by the Board, he will be in no doubt that the game is on, and they will know if he can show up or not and can inform the Referee coordinator, if needed, so that a replacement can be found.
That should be simple enough for any team interested in playing a match.

Pretty sure the home team just have to make contact with the ref. If they didn’t then they can get a fine of €200 I believe. Can only imagine the home team didn’t as if they had made contact, it would have been obvious the ref would be a no show. Disappointing for both teams who turn up on a Tuesday night however. Even if it is not a requirement for the ref to get in touch with teams, if they can’t make the game last minute and can’t contact the county board in time, they should have the decency to let the teams know. Details of teams managers are easy to find on Dublin website.

Fairly sure the home team contacted the ref during the week and he had said he wasn’t available. Appears to have been a mix up on the admin side, can happen, tough on the two teams still

Well, if they contacted him and he said he wasn’t available, why the fook did the home team show up for the game??