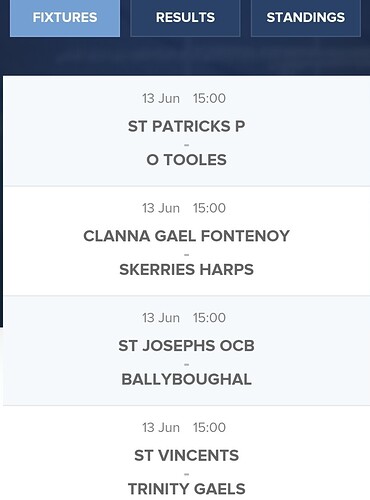 Trinity got a walk over

Clanns Beat Skerries - how are the scores been sent in ? Usually got a text but nothing so far .

Referees report, the automated text updates the system but the report when received is the official score recorded

Thanks - from Ray Ray

Watched first half of Vins and CNG last night , the lack of bellies in D9 these days is shocking

Some serious football played , standard across Dublin is great to see

lack of bellies in D9

Even in div 10 its becoming slim line

Watched our Junior B lads last night, doubt there was one lad under 28 playing, good quality game too, its a young mans game these days

I’m 37 soon and yes it sure is. I don’t want to admit but my time is running out against these young lads and sooner than later

When we were young, it was acceptable for younger, fitter lads to get clattered and busted by older, heavier opponents when they could catch you. Nowadays, when we are those older, heavier players, such behaviour is no longer tolerated.

That’s why I had kids

Kids are soft nowadays. Well I think they are haven’t been able to catch them

Stop the lights chopper you’re flying about the place

Ye don’t see me the next day man