Seems as though Starlights are back according to fixtures list. Any idea whose made way?

Where were you able to see the fixtures? Hadn’t seen them officially listed yet only the dates games are to be played

Ahh, could well be the case that these are fixtures from the abandoned league in 2020 actually. They’re just down as TBC. 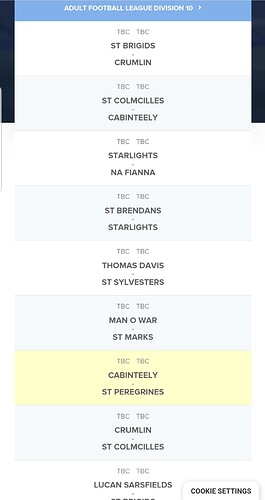 It would be great if they are back. I hate seeing clubs struggle.

Looks like there was 9 teams in South and 9 in North last season. I wonder will they run it as 2 separate leagues this year.

Meant to be one league going by fixture dates. But can’t see it happening with 18 teams. Colmcilles should go up based on winning the league last year and hopefully if they put in an application it would be granted

If you go to the upcoming fixtures section and keep scrolling down the fixtures are there.(afl4 is on page 8 or 9 if that’s any good for you)
No dates given for the games yet but the fixtures are listed so you can see who you have home or away for the year, and quite possibly the dates will be simply allocated top to bottom of the list.

The fixtures up there are last years before they split out the leagues. They may be similar but I wouldn’t be taking them as gospel yet

There’s teams who played a higher level last year after requesting to go up listed at their previous level. Wouldnt take notice of what’s up there at all.

Div 10 has been broken up into North and South. We were in North last year and have been moved to South this year for some reason

Will there be a Division 11 this year