This thread is to be used for fans requesting or swapping tickets. We are only interested in talk of face value only and we are not responsible for ANY arrangements that you make with another party through the forum.

sticking an early spoke in for preferably a hill… i have dcbtickets.gaa.ie on constant refresh as well…

Am looking for one ticket please . No reasonable offer refused

Lads. I’m looking for tickets. If anyone hears of any spares, give us a shout please You’re attracting the eye of a certain man… You’re attracting the eye of a certain man…

Have you met my Italian friend ?

Jimmy the Pigeon. From Genova… He just wants to dip his beak… FFS,
Don’t say repeat the curse , you will bring him back.

Could pat hickey and falcon be the same person ???

Navyseal1
13m
FFS,
Don’t say repeat the curse , you will bring him back.

I’d like bring him back.
We need to have a chat

On the mayo blog the gist of getting tickets is to enter every raffle for all Ireland tickets by clubs nation wide , and throwing up links to them.

i’m having a bad feeling about the possiblity of the PP window being re-opened lol. I wish the DCB would make an announcement one way or another. they did say on sunday night to keep an eye on the site and social media about tickets, but that could mean anything.

Ill settle for 2 tickets, if anybody knows of any!

i take it from the DCB annoucement today that there is no reopening of the PP window. Ah well.

I’ll take anything if anyone is lucky enough to get extra. 1 would be great, 2 would be ideal… Need to keep the run of winning every final I’ve been to…

Very unlikely Parnell Park scheme will re open. Clubs will want every ticket going and won’t want any given to people who can afford to pay for a season ticket now just to get an AI ticket. Unfair to open it now.

they’ve opened it before alan, and it was a godsend for me for example. I had the PP every year from 2001 to 2012 then because of the recession and coming to an arrangement with the mortgage company I just couldnt afford it in April - but I could in August/Sep because I wouldnt have as much to spend in the summer with lower heating costs, no school lunches and so on. So i was able to get the re-issuses in 2013 and last year. I didnt mind spending the extra because it goes to the county board. As i refuse to be scalped its more than a certainly that I wont get in this year and that’ll be the first final i’ll have missed since i started going in 1980.

I have no doubts that on the day if I am hanging about near CP there will be oportuinuity but firstly how do I know it is a real ticket, and secondly since Mayo think this is the promised land i can just see my offer of face value being sneered at as a lad pumps up a ton for a hill ticket.

There are various shades of unfairness.

I know it’s highly unlikely but if anyone has one even 2 tickets that they’re selling can you please let me know? Been to every match league and championship and stupidly didn’t get the parnell pass this year!

I’ve got permission from the mods to put this up.

My club (Wanderers) are running a fundraising raffle for 2 tickets to the All-Ireland football finals.
The prize is Bed and Breakfast in the Croke Park hotel as well as entertainment on the Saturday night.

Tickets only €5 and can be bought online here: https://www.myclubfinances.com/tickets_m.asp?LL_ID=760&intTE_ID=
Or through our website: www.wanderersgaa.ie 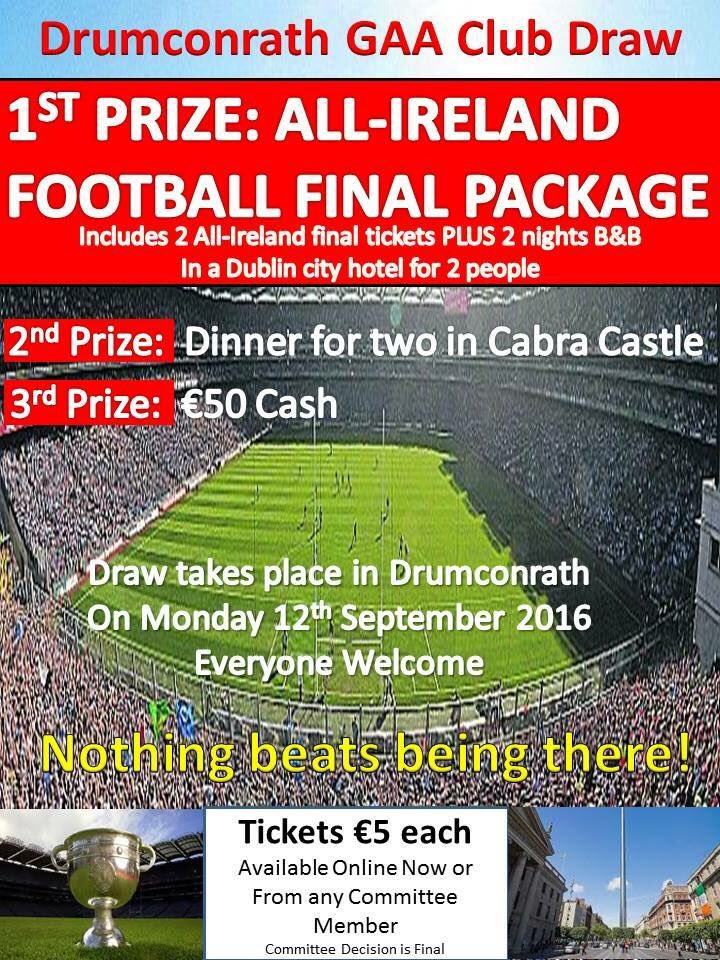