Great to see the site back up and running. Will help get through the working day.

Was out in Abbottstown a few days ago. A smashing facility with pitches as good as Croke Park. No reason why this couldn’t be used for club Championship matches when you see some of the venues used. The fully equipped gym has yet to materialise - from what I could see anyway; there appeared to be two or three exercise bikes in the room!! Dublin GAA stars Alan and Bernard Brogan are teaming up off the pitch as they move to snap up a luxury hotel in a multi-million euro deal.

I hope it goes well for them. That was a Radisson hotel, before, I think? It must have suffered during the recession to be ditched by Radisson?

As far as i know NAMA took it over and then the Pillo group bought it .Lovely hotel , stayed there the night before my wedding ( got kicked out of my gaff

) . It does an unreal trade during the Summer because of Tayto Park , the place is mobbed . They should do well and best of luck to them .

Parkinson leaving Off The Boil, one down and a few more to go now…

Parkinson leaving Off The Boil, one down and a few more to go now…

Whatever people’s opinion on him he was bang on the money leading up to the Donegal game in '14. Remember listening to him in the lead up on the podcasts and thinking he’s some spoofer but he predicted and outlined what the best way was to beat us that day . And it was pretty much how it came to pass . Wonder who will take over his role . Is he still living in Dublin ? WATCH: 'No? I came second' - The hilarious moment Spanish athlete realises he...

The look of disbelief is priceless and his reaction is even better.

Don’t know how positive this is, but it’s a start anyway 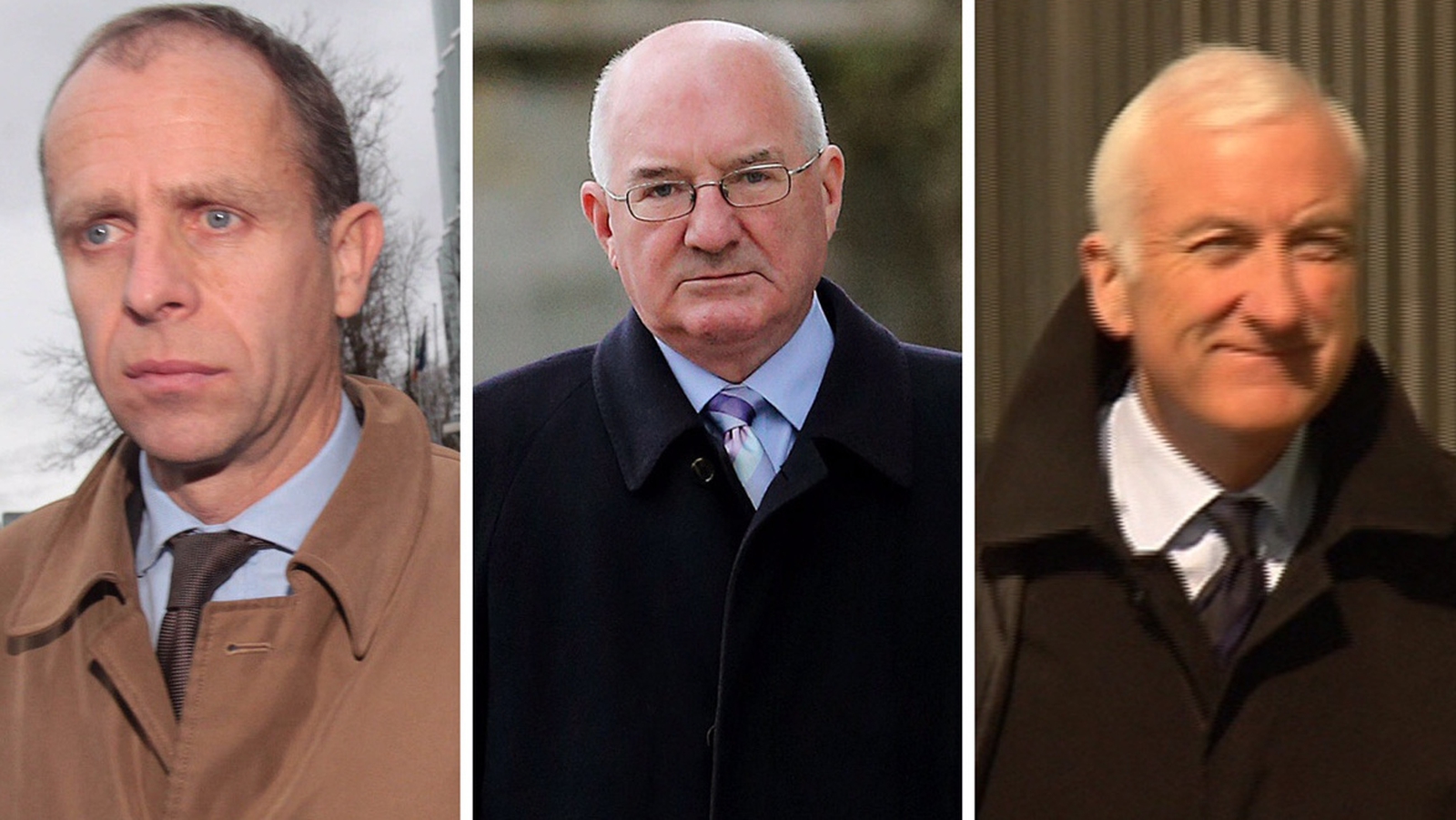 Three former bank executives have been given prison sentences ranging from two years to three and a half years at Dublin Circuit Criminal Court for their part in a €7.2bn conspiracy.

Now for the FF cabinet of the day…

Well, I posted it in the Get it off Your Chest thread. Way-too-lenient sentences.

Don’t disagree, I’m amazed that they were convicted in the first place

Anyone else feeling more positive about Sunday ? I am

Indeed, greedy cnt. Spends his managerial career moaning about he is good enough for a top job. When he gets his dream job, he fcks it up. He’ll probably replace Moyes at Sunderland before long.

In fairness to the English FA, they moved quickly and didn’t take any crap. Compare this to FIFA, UEFA and many other national associations.

Might be other managers getting squeaky bums this morning.

In 1975 I was disappointed, but probably too young to realise the magnitude of that loss and certainly nobody was aware of the extent to which Kerry would dominate once the '76/'77 Dublin team had moved on.

1978 was a bitter pill to swallow. That Dublin team was still good enough to win but were swept aside in 7 or 8 minutes of madness.

1979 was the swansong, albeit they fell short at the final hurdle to a Kerry team that was really in its pomp. The Leinster Final victory that year was one of the sweetest, 14 on, 14 off, etc.

The early 80’s were bleak. Becoming the third best team in Leinster after Offaly and Laois. Mullins’s career seemingly over. But, Offaly’s victory over Kerry in '82 and Cork’s subsequent victory over Kerry in the '83 Munster Final gave hope to lots of counties that Kerry were no longer invincible. The '83 Leinster Final was the realisation that another All-Ireland was there to be won. Kerry were gone and we’d beaten the reigning All-Ireland Champions. But then John Allen and Dinny Allen (waving to the Hill after scoring) ran amok. But Ray Hazeley and Barney (amongst others) brought us back at the death to force the replay and Mullins’s greatest ever performance by the Lee saw Dublin win the replay. And then the 12 Apostles overcame Galway’s 14 in THAT final (a week after that final, TSG had a special show to look at where the game was at regarding on-field violence - no such show after the '96 final replay but, sure, Dublin weren’t involved so no need for hysteria).
'84 Final we never showed up, other than Mick Holden battling manfully to the end.
'85 was a repeat of '84 until Kearnsie started getting the measure of Jacko but Smokey’s two goals came a bit too late.
'86 and Barney’s shoulder… the start of a Meath period of dominance over Dublin to last until '91, other than Dully’s cracking goal in the '89 Leinster Final. Keith Barr and John O’Leary each having moments of madness in the semi-final against Cork cost us dearly. The one that got away for Gerry McCaul. Was Gerry Mc Dublin’s unluckiest manger since the days of Heffo’s Army?
And then there was the Mayo-esque pain of the early 90’s. The four-game saga against Meath. Paddy Cullen having no Plan B for Donegal in '92. Derry’s sucker-punch finish against us in '93. Overwhelmed in the first half against Down in '94 - the late charge falling just short. And then we fell over the line in '95, thanfully and also had the pleasure of one of our best ever performances when beating Meath in the Leinster Final.
Alarmingly, we had become very uncompetitive during these years at Minor and U21. This resulted in the barren years from '96 to 2001. No League titles. No Leinster titles. Failures against chokers such as Kildare. But Tommy Lyons’s team of 2002 delivered a Leinster title and restored some self-esteem in the team. Getting to All-Ireland U21 finals in '02 and '03 and winning the final in '03 finally showed that we once again had winners on board. But the mid/late noughties were tough years to make the breakthrough at senior level with Kerry re-establshed and Tyrone getting their rewards for consistent production of quality underage teams. But at least we had re-established ourselves as Leinster kingpins. The tough lessons learned from humiliating defeats to Tyrone ('08), Kerry ('09) and Meath ('10) along with the narrow defeats to Cork in 2010 and the NFL Final of 2011 put us in a position to become what we are today.

Since August and September of 2011, we have witnessed the greatest Dublin team in living memory. Those of us who can remember the bleak years will probably realise that what we have now cannot last forever. Those younger must learn to cherish these days and not take them from granted.

Kerry will be back. So will Cork, Galway, maybe too. Tyrone for certain. But savour these days for now.

Since August and September of 2011, we have witnessed the greatest Dublin team in living memory. Those of us who can remember the bleak years will probably realise that what we have now cannot last forever. Those younger must learn to cherish these days and not take them from granted.

Kerry will be back. So will Cork, Galway, maybe too. Tyrone for certain. But savour these days for now.

'76 was my first final. As my folks, and all my extended family, were from Armagh the 77 final was special.

I missed out during the 80’s and only moved back to Dublin from London in 1992. Luckily I missed out on the 91 saga.

Suffered the rest of the body blows of the early 90’s but they were nothing compared to the hammerings in 08 & 09.

It’s a privilege to see these lads play now, don’t take it for granted.

These are golden years.

While Jim would love us to be 100% purist all the time I think himself and these lads know that this is not possible.

This team has been set a huge amount of tests in the last few years and failed only one. Even then huge lessons were learned.

Every time since, no matter what has been thrown at us, legally or illegally, we have found the answer.

Whether it is physical, mental, skill, ability or anything else, this bunch of lads have always prevailed.

Just checked into my hotel for a four day break in torroleminos. Got room 101 - the place to put ressers where no one else will… fucking thing is at the back of the hotel! Still… all Ireland champs 2016, cheesy music coming over the tannoy, San Miguel in hand… life is ducking great