It feels like it has been years since a game. All Ireland in September really spaced out the year.

Anyone know when fixtures for allianz league come out?

Fixtures weren’t released until Mid-November last year, would imagine it will be the same this year as well…

Flourbags first up in Croker according to this article Kevin McStay’s first competitive match as Mayo manager will be at home against Connacht rivals and All-Ireland finalists Galway in Division 1 of the Allianz League on the opening weekend of action.

I was looking forward to Parnell

Has any news outlet released the full provisional fixture list?

True. But the problem is that you will only get 8.5k into Parnell Park, which is why Croker will remain as the venue of choice.

I get that . But 15k gets pretty lost in CP in my view

The pitch in Croker with its greater width is much better suited to the type of game Dublin play.

I agree. Really hope we have derry away, so theres at least one game that will be a spectacle

Cant find them anywhere. Seems to depend on the local journos. Kerry, Louth, meath and mayo i could see online

Seems to be the case that the County board/team managements have received a provisional fixture list (which has yet to be fully approved) and some journalists have got their hands on bits of it. It was similar last year if I remember correctly but the actual confirmed fixtures didn’t come out until a few weeks later.

We have Clare at home. Thought this game would be in Ennis. Parnell Park wouldn’t even be full for this game. 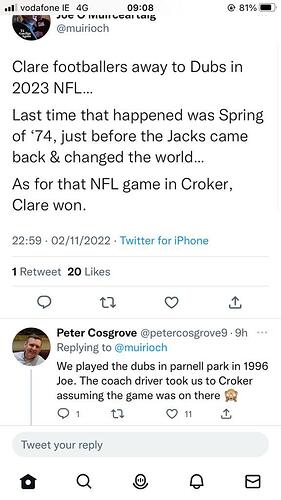 Have they a date for it?

As far as i can see, what we know of the provisional list so far is;

According to twitter its Cork Away, Clare at home but cant see a date. Nothing for limerick and derry

You could play the Limerick game in St Anne’s

Dublin will stroll through D2.

Its probably a good thing for Dublin meaning the older lads can sit it out until the end and be ready for the additional games in the new structured championship.

Dublin are a loss for D1 as that glamour tie isint there this year although Croke Park adds nothing for league games.

Not sure about West Kerry

Start planning your trip to the real capital for February 19th