Always tough to know how games will go up in PS because it’s so wind dependent.

Might be a bite in Galway if they’re looking to bounce back from last week. Especially if they’ve the Moycullen lads and Shane Walsh back.

I would like to see a team along these lines.

Better game needed from Scully and Lowndes and there’s probably minimal chance Lowndes will play in the corner after playing at wing forward last week. O’Conghaile experiment didn’t work. Murphy might work in a normal league but not now with only one game left. I really wouldn’t mind seeing Cian O’Sullivan get a good run.

If we don’t see McCarthy or Mannion I won’t worry too much. We know what they’re capable of.

Wow! The Friday before Dublin league game v Galway and there have been 2 posts on the game ! Strange times indeed.

My hope for Sunday is that Dessie starts looking to build settled team for start of championship while giving those lads that are genuine contenders to play in the championship the opportunity to show what they can do / get experience.No more left field selections!!

With this team I’d like to see on Sunday would be:

Hoping to see Colm Basquel, Mannion, Gavin & likes of Philly, Lowndes & MDMA get game time also. Kevin Mc obviously still there also. Losing Diarmo off the bench will impact us in the bigger games. Don’t know where COFB has disappeared to as thought we’d get a good look at him in this league.

Scully not offering much at the moment and don’t think McDaid or Murphy are up to this level. None of the left field selections have given any indication that they can make a difference. Doesn’t auger well for the future as more players step away. Will hopefully see some of the u20s step up.

The match will likely be a dead rubber if Kerry win tomorrow. Don’t understand how the final round of games are not on at the same time.
I imagine it will be a very strange looking team if there’s nothing to play for.

Suprised by this myself. It’s always been the case that the last round of games are all played at the same time, which is why it’s usually Sunday, as some counties don’t have floodlit grounds capable of hosting inter county games… Even in these weird times the only possible reason to change is to facilitate the coverage on Eir sport, and they could have found a game that doesn’t directly affect the winning of.or relegation from any given league.

It could be related to the actual trophy presentation. Considering there’s no final the trophy must go somewhere and if it was left to the one day it could end up somewhere with no winners. I believe it’s going to Kerry tomorrow and if they don’t win it’ll probably go to Galway. Not sure what happens if Donegal win the league after the Galway Dublin game.

As for the game itself I personally think it is a game for giving lads a chance, even O’Conghaile. I know he got slated on here since the Meath game but we really do need to look at midfield options. MDMA for all the great work he has done for us over the years is getting towards the end of his playing career, especially with regards to playing 70+ minutes. I’d say Farrells big worry is that with Jack Mc gone he might have to put Jamsie into the half back line permanently, which leaves us very light in the middle. That cuts our options to either moving Howard back or bringing someone else through, and unfortunately we don’t have any stand out options at the moment. I’d much prefer he try to find some cover now and in the early rounds of Leinster than be looking over his shoulder in the last 15 minutes of a semi or final wondering wtf do I do now.

That might be it but personally I would rather see the integrity of the league maintained that a trophy presentation.

“Integrity of the league”. There’s another one for the 2020 book of phrases along with “wet pubs” and all the rest.

Dead rubbers aren’t uncommon in the league and have featured in Championship too. It’s not ideal but logistics this year probably mean there’s little other option.

Not really. There is a very good reason why leagues all finish at the same time on the same day. If you don’t like the word integrity fair enough, but there’s a big difference in a dead rubber and a team knowing exactly what result they need to win a league. If Kerry were to lose Dublin know a draw will do them. Galway need a win so the fact that all games are not played together gives Dublin an unfair advantage, grand for us but if was the other way around I’m sure a lot here would be annoyed by it.

I get that it’s a bit shit but this year is all over the place anyway. League is more of a warm up now for championship unlike any other year. Kerry go out tomorrow knowing they must win. Dublin and Galway may have to do the same on Sunday.

Preferably it’d be Tyrone Mayo on tomorrow so there is an unknown about Sunday but obviously there’s a reason why not and I think the trophy has a part to play in that. 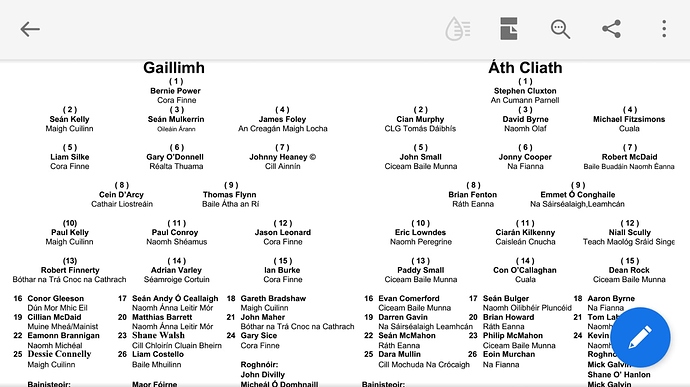 Very possible that some names missing could be isolating and it’s not public knowledge.

Think the COVID rules state you can only bring/tog 24 players from a squad.

Good to see Sean McMahon on panel. Would like to see Murphy and O’ O’Conghaile get another chance. Think Bugler will start ahead of Lowndes.

Galway have most top lads bar Michael Daly and Ronan Steede in that 26. John Daly will be huge loss at centre back. Even with everyone back that Galway defence will struggle against Mayo forwards in Connachy final. . Joyce will need to employ a sweeper for that game.

And also no Comer. That’s a big loss.

Don’t know if Shane Walsh is fit or not. He was on bench last week but don’t know if he came on. A Galway team without Comer and Walsh is significantly weaker.

I knew was missing someone obvious. Comer will be key man along with Walsh.

I don’t get starting Eric Lowndes in the half forward line. He has resolutely shown in the past that he is a solid defender but half forward? Emmet listed at mid field again? I’m beginning to wonder what’s going on in Dessie’s head.