Bernard Brogan has announced his retirement today. 7 All Ireland medals, 13 Leinster medals, 4 all stars and Footballer of the Year in 2010.

What a player he has been over the last decade and more. One of the most iconic #15s to ever play the game. Too many memories to single out a golden moment but in the years of 07-10 when we struggled he was always the beacon of light while others around him waivered. When the time came in 2011, along with Alan, he was instrumental in QF and SF wins and since then has continued to flourish. Delighted that he has got to go on his own terms after the injury looked like it might end his inter county career

Thanks Bernard for all the great days

Absolute legend. One of the all time greats to wear blue and navy. What a privilege to have witnessed him. Thanks for the memories Bernard

What a player. Dublin legend.

Kind of knew that it was coming, but still a sad day in one respect, but a good day to remember one of the greatest to ever pull on a Dublin jersey.

Enjoy the retirement Bernard and thanks for the memories

It was coming for sure. Awesome player. Just awesome. 2010 for me Bernard was simply unmark-able. Good luck Berno in the retirement.

Phenomenal player on his day unplayable. 2015 in my opinion was the best I’d seen him play. His scoring was unreal. Absolute legend 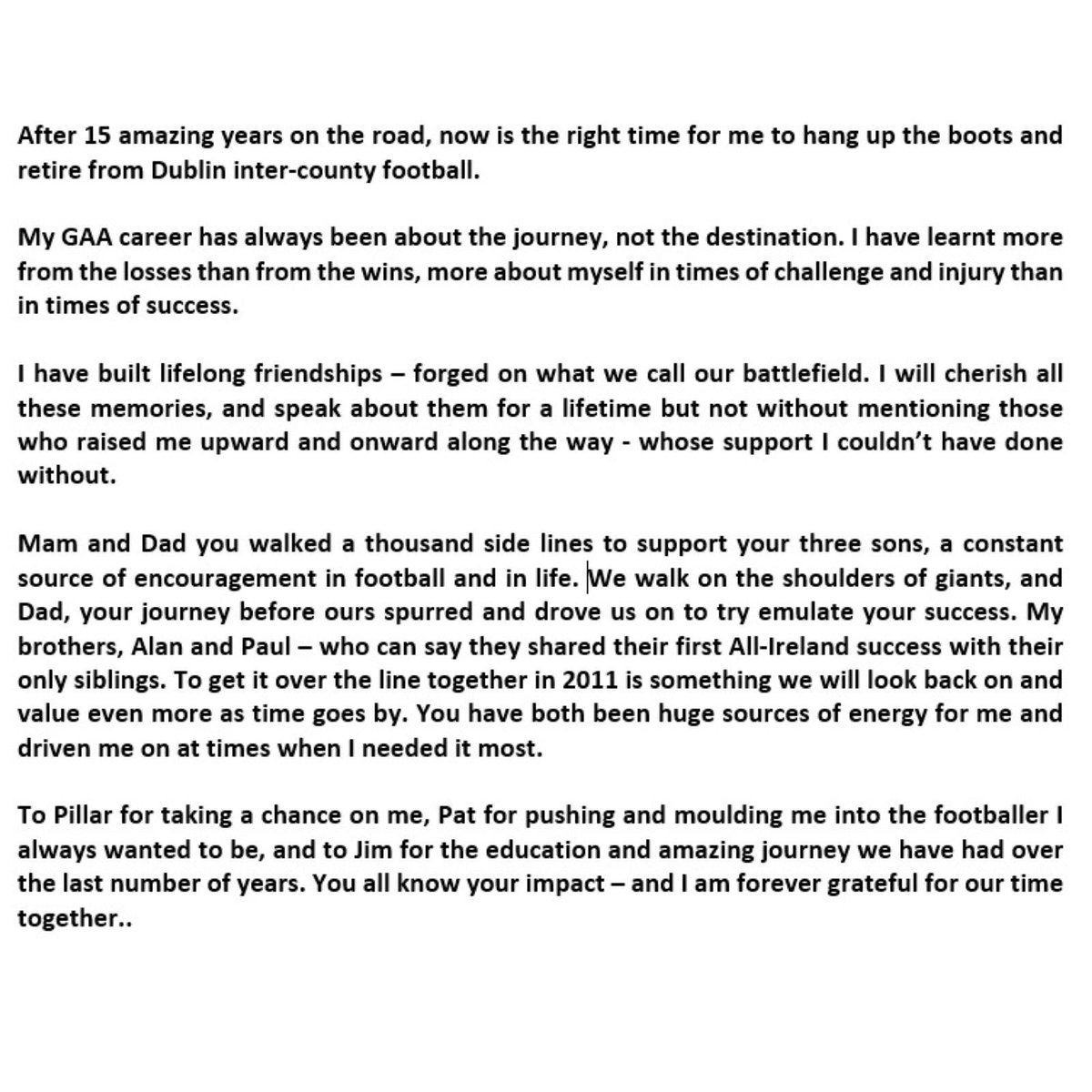 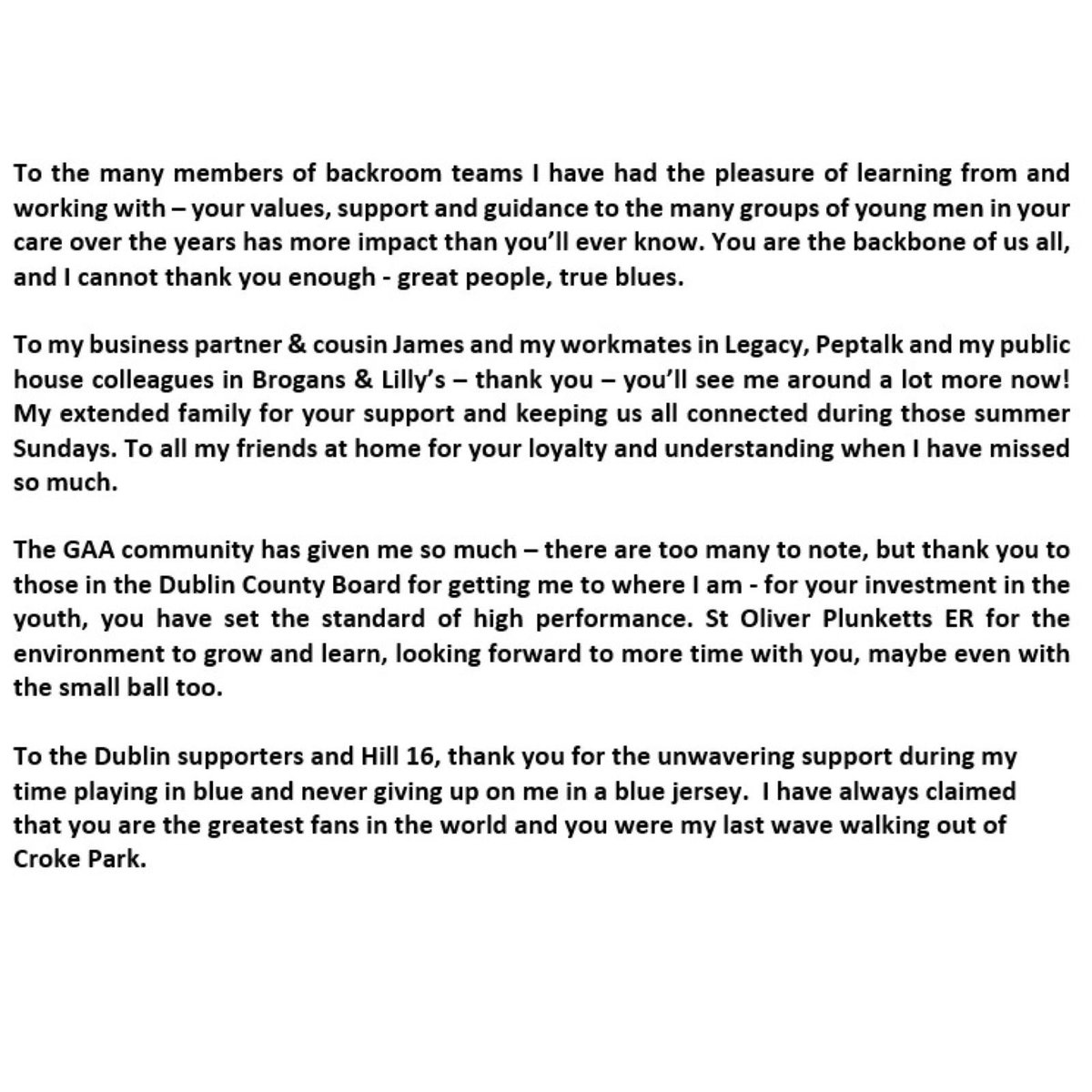 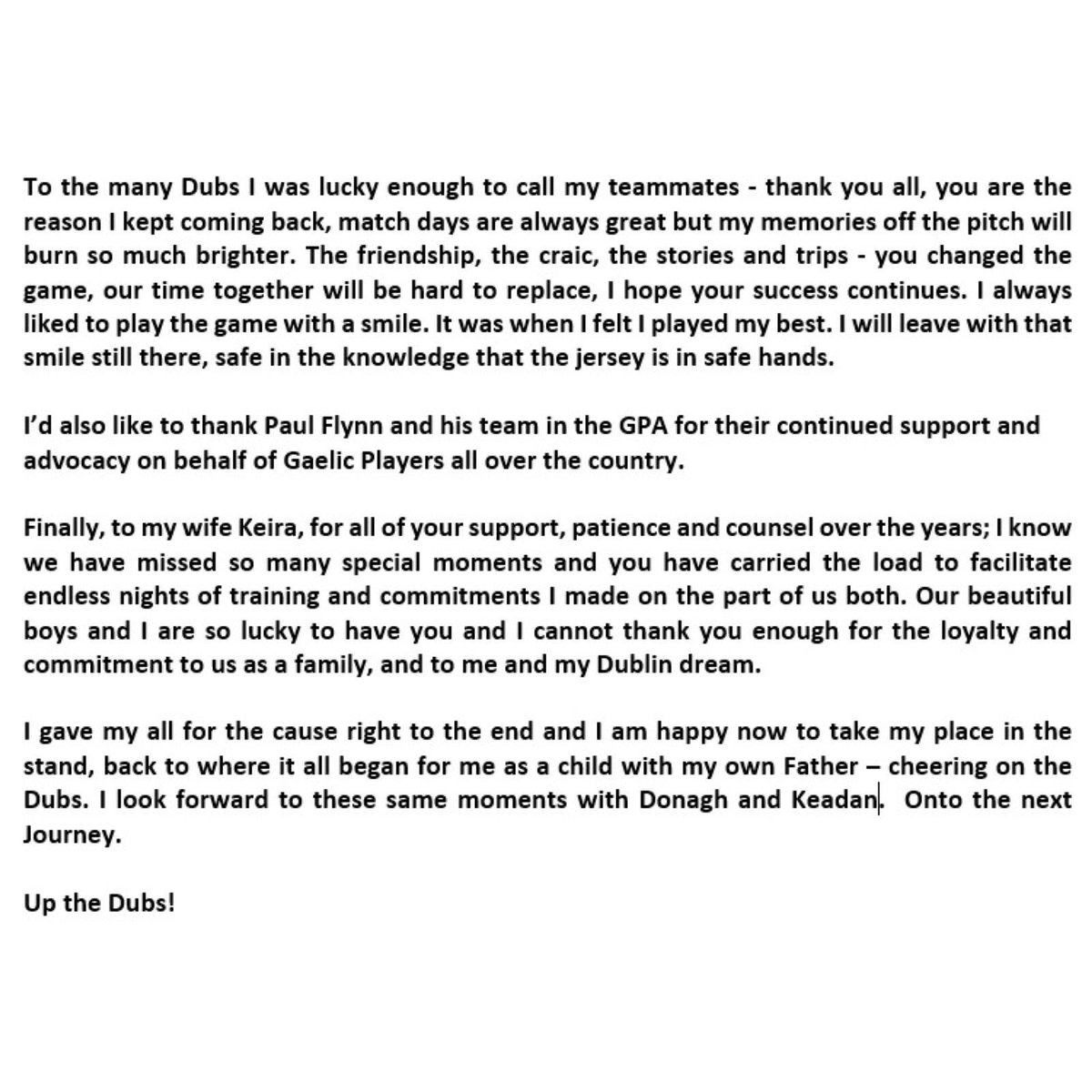 Best wishes Berno. One of the greatest we have had.

Best wishes Bernard and thanks for the memories over the years

In his prime, he was the best inside forward in the country. A joy to watch and support. Nothing else to add! Hope he enjoys his life to the fullest now!

Best luck Berno , at yoiur height you were unstoppable , you hung around and I would guess had a massive influence on those around you even though playing time was brief
I loved how your game evolved from a sharpshooter to a team player, not every GAA player has that fortitude to adapt…
May you enjoy whats left of playing time with your club back to were it all started , will Dad walk the line ? It all comes full circle.

A legend. One of the few players to win POTY without making the AI final.

An absolute legend of the game. Enjoy your retirement Bernard (and running after those twins!)

Miss him already, what a servant to Dublin he was -
how lucky we are to be around to see him and this team.

With one of my gang here
Lovely man
Lovely footballer A great sportsman and ambassador for the game, a sad day but that’s Sport, we’re all getting older,
Looking forward to many an appearance on Up for the Match now!!
Thanks Berno, you’re a true Dublin legend and our kids and grand-kids will hear many a story of your time playing.
Slainte

My Missus always said that he played football like a gentleman.

Knew it was coming and yet it still hurt. Legend doesn’t do him justice. Fantastic player, fantastic man, I wish him all the best in the future, I can’t wait to tell my grand kids about him.

Going out on a high with 7 All-Ireland medals.
I was privileged to see his Da play in his prime, thinking he was one of the best ever for Dublin. Bernard Junior ensured he wasn’t even the best footballer in his family.
Enjoy the retirement and thanks for the memories.