Typical reaction from a bullshitter who has no reply to hard facts!

Anyone thinking what I’m thinking?

Dunno about that. Had an allotment in the Naul for a couple of years, very tight clay soil, waterlogged in winter and hard as rock when dried out. And dusty as hell in dry weather from April on.
The dreathar used to grow market garden crops in rented fields near the airport and Kinsealy back in the day, bloody hard work I can tell you, as I was one of the poor shams being payed a fiver a day for it at weekends and in me school holliers

You’ll always get variations in soil quality and it can go from good to bad in literally a line in the ground. A field we used to have of about 9 acres was great land bar a centre patch that used to flood in winter. Likely a spring underneath.

I think that the land in north county Dublin that’s east of the M1 (or old N1) was/is much better for growing crops and veg. The soil around Rush, Lusk and Skerries is quite sandy, given its proximity to the coast, which tends to be very good for growing stuff.

Yeh, it’s the same here where I live, the veg basket of half the country.
I should say the land around the airport & Kinsealy/Portmarnock was better than where we were near The Naul for veg etc. I’m guessing further north was more glacial, no idea, just musing on all the rocks n stones in the ground and the hills there, almost the only hills in North county. 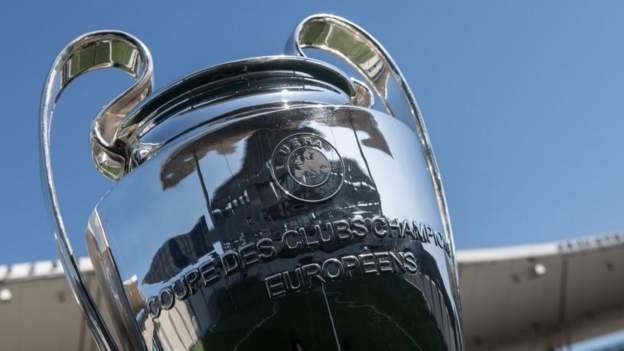 European football bosses say they are "exploring different ideas" amid reports that some Champions League games could be played outside Europe.

it would only work for a final, no team is going to give up home advantage in a group stage game or knockout game.

It is just money money money, I like soccer as a sport but is becoming harder and harder to actually like a club, there is feck all identity a bigger turn over of players all the time, managers jumping from one club to another mid season etc

Yep it gets to the point where you wonder what exactly are Liverpool, Man utd, city , barça Etc supporters supporting, I mean don’t know about in England but here Barça or Madrid more often than not dont even wear the clubs colours anymore, the only thing that doesn’t change frequently is the stadium and now they are starting to play games in neutral countiries where it is next to impossible for the real supporters to go, the Spanish super cup in Dubai or some shit hole like it, saying the European super cup is heading for the states, a four team format, CL winners , Europa cup winners, Conference , nobody gives a shite, cup winners and the MLS champions

Sure Man Utd removed the FC from their name did nt they. I get the impression the glazers would gladly let the actual football finish and they just have to sell the jerseys etc