If anything the split season will allow a higher volume of top coaches get involved with the clubs. Can only be good for the standard of club hurling here. If you can afford them of course, which a lot of clubs can.

For outside managers if the cash is right it definitely will

I fancy vincents to do somthing in next two years.

That’s Vinnies 4th different management team in 4 years, that would raise alarm bells for me and maybe Giller is the man to stabilise the group.
I can’t see them doing anything and at best they are the 5th best side at a push.

He will get some more out of them

Only if they buy in to it, might not be an appetite for double sessions for a team with at best an outside chance at a final depending on the draw

He will get some more out of them

You’d expect he would and with the Mulcahy’s they might have a few scoring forwards something they’ve lacked in recent years other then hedgo. Still not as much talent as NaFianna / Crokes imo but be interesting to see if he can get them closer. Good minor team recently hadn’t they?

Lucan lining up a big Kilkenny name by all accounts

Fogarty? I know he did a few sessions with them last year. 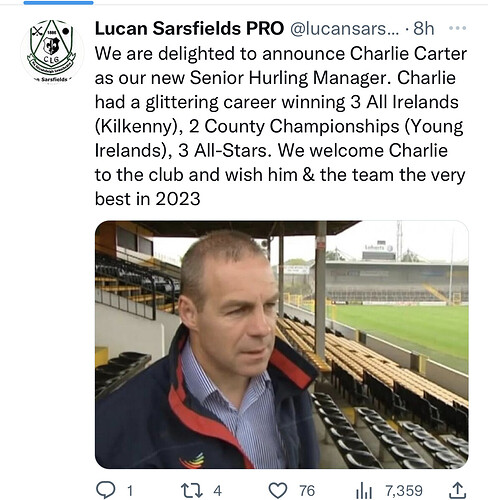 Didn’t know Charlie was on the circuit. Who has he managed before?

When did st martins last win a county?

That’s a hell of a lot of lads around him !!