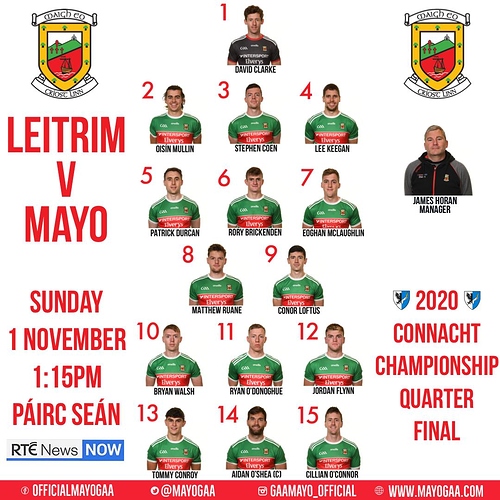 Brickenden? Never heard that name before.

No junior altar boy. Is he injured or getting the elbows sharpened for later in the competition?

I’ve never heard of 6 of them and I’m even sure I’ve heard of Tommy Conroy maybe I think I know him because of the Vincents one !

Have these lads played the whole league ?

Haven’t heard of him myself. DOC could still start or resting him for Roscommon. Mayo have used some amount of players over last 3/4. A alternative 15 to that team would be a comfortable Division 2 team.

Bar Brickenden all have played league.

Leitrim +14 is looking very inviting for this one

Mayo to be comfortable, very comfortable regardless of how many debutants they have. Bigger battles to come. I like the look of Conroy from what I’ve seen. That Flynn lad got sent off against Dublin in the league this year I think.

Keegan at corner back is odd, I wouldn’t want him isolated on a corner forward inside based on what happened in a certain semi final last year. It’ll be interesting to see if McLoughlin at 6 happens again.

Up Leitrim. Nothing against the Mayo lads here, just the original homeland!

Flynn is the guy who got sent off in the All Ireland Under 20 final the day we played Roscommon in the Super8s. Threw the head with the Ref if I recall.

Christ @Stato82 you really know how to put the boot in.

Yeah I remember that. I was going to say but it was a while ago so probably unnecessary to keep bringing it up. He was young and probably had huge regrets afterwards.

He has 2 red cards already this year. I’m sure Kevin McStay will be highlighting his disciplinary issues

Keegan will be centre back for Connacht final and McLoughlin go wing forward.

New blood. New Mayo. We can all watch in awe as the phoenix rises.

Won’t win anything with Loftus at midfield will they? Chap Conroy looks excellent. TG4 commentator said his nick name is Goals. Not very original, or is it.

Leitrim +14 is looking very inviting for this one

I wouldn’t back it myself.

Mayo have put up 3-23 and 3-19 in their last two games against good sides and Leitrim have been beaten by Tipp last week and had to give a walkover the week before that.
Leitrim will throw in the towel early and Mayo will score goals against them

Won’t win anything with Loftus at midfield will they? Chap Conroy looks excellent. TG4 commentator said his nick name is Goals. Not very original, or is it.

There is 2 Tommy Conroy. The current player plays with The Neale. Tommy Conroy who played minor in 2013 is the lad with goals nickname. He plays with Kiltane but had bad luck with injury.

Ah I see. My Irish isn’t what it used to be

Wouldn’t be so sure without a back door to rely on.

I take your points, but 14 points in winter is a big ask.

dont go saying that round Judes or you’d get lynched