Just had a goo at gaaboards & saw this . At least we know now what the going rate might be to pay a manager . Dont know what peoples opinions are on this crap been leaked to the likes of SportsJoe but its a bit of insight into what’s going on . But I’d wouldn’t be happy with the carry on of the likes of these stories been anonymously sent out . 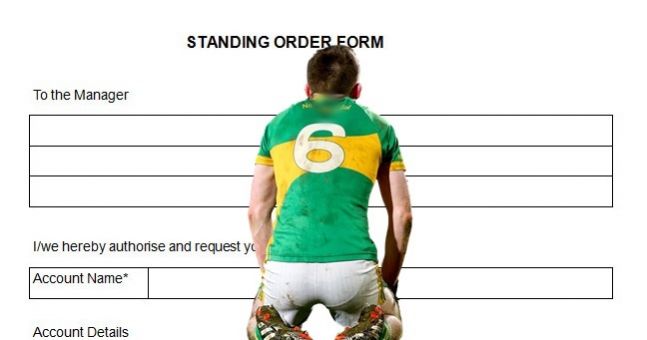 This outside manager is VERY pricey

Heard How much a Dublin senior club manager will be getting this year. How they are raising funds for it. Getting out of hand…

Call me naieve but I mean when did this craic start ?
Amateur game & all that but if I’m paying for a manager by direct debit each month I don’t think I’d be too happy if he gave me any shit during a training session for example . For a start the players should not be paying for this , let the club organize some other way . Where do you draw the line at who should be paid , what about the volunteers who put in just as much time if not more . Maybe somebody from a club or who has experienced this can shed more light on .

Jesus if the chairman ever walked in and asked me to contribute to a manger salary that’d be it for me, wouldn’t set foot in the club again.

Jesus if the chairman ever walked in and asked me to contribute to a manger salary that’d be it for me, wouldn’t set foot in the club again.

It goes on from div 1-4 no doubt lower. It’s alot of time for a coach to commit to a club who he has no affiliation to.

But I have never heard of asking players to pay. Plus membership and subs. I’d have walked out of that room to be honest.

Would that not instantly create a bad vibe in relation to the manager if you knew you had to contribute to his salary ?

I’m calling bullshit on that story.

Quite possibly seeing as they don’t want to name the club .

£10K for an Ulster Club hurling team? I doubt it.

sums up that joke of a site

How to avoid getting conned by fake news sites

Here's how you can identify and avoid sites that just want to serve up ads next to outright falsehoods.

If this was true, surely it would create a disfunctional power dynamic in the dressing room. When a manager is trying to get a squad to do something they don’t really want to do, the squad would be just thinking we don’t want to do it and as we pay your wage here we get to decide.

That can’t be true.

If this was true, surely it would create a disfunctional power dynamic in the dressing room. When a manager is trying to get a squad to do something they don’t really want to do, the squad would be just thinking we don’t want to do it and as we pay your wage here we get to decide.

But there are genuine managers out there also caught in this vicious circle. It’s far harder to manage to play. Outside training sessions and games , there are physio’s to contact, selectors meetings, possibly calls with S&C coaches, individual chats with players…

At what point does a manager get to when it’s actually costing him money at work and impacting his family life. A lot of people assume that ALL managers are responsible for the lunatic training regimes these days. But in a lot of cases it’s driven by what the players expect.
And if the manager doesn’t deliver that regime the players boot him out.

At what point does some level of re-imbursement for managers actually become a reality.

It’s a complete mess. I’d hate to be playing or managing these days. Seems to be zero fun in it anymore.

The only bit of crac you get these days is by winning games.

So has this story gained any traction with any credible media source? I’m going to stick with my original assumption and call bullshit on this story as I do with all stories I come across on that toilet of a website Joe.ie. Are they all transition year students on work experience in that place? There’s no way anyone over there has ever studied journalism surely?

I work in a bank and can confirm that I regularly get payments into this account. I can’t say any more for data protection purposes but if some guys don’t have the full amount they often drop in jelly beans, cans of Dutch Gold or Terry’s Chocolate Oranges …