I was going to post this in " drugs in sport" but that’s under foreign games .

Morally wrong to subject amateurs to this kind of regime.

Morally wrong to subject amateurs to this kind of regime.

Even if it could protect them from the after effects of certain drugs in later life?

Is there not an argument that says it safeguards their health and protects the integrity of the games ?What is wrong is the public nature of it . Who is briefing the press ?

If your argument is that testing is a social good then we should be testing every man and woman who plays sport. Regularly.

They are amateurs. It’s their hobby. Subjecting them to WADA rules is absolutely ridiculous. Sharapova gets fifteen months and then gets invites to get her back on the multi million dollar horse while Thomas Connolly can’t go play football with his mates for two years. Bullshit.

Have a bad feeling bout this " footballer from prominent county " hope iam wrong .

Remember talking to a Dublin captain after a very warm day in Croker and he was asked for a urine sample and after winning the Leinster title, he wanted to go celebrate with the team, but couldn’t produce urine as he was near dehydrated after the game and had to wait hours to produce enough! Seems very unfair at the face of it, but there for the goodness and wellbeing of the players.

It’s not Rochey. It’s there because the GAA were told they wouldn’t get Sports Council grants if they didn’t introduce it. They refused to accept amateur rules for amateur players and insisted on full WADA compliance. Ridiculous.

I work with a lot of amateurs from a wide range of Sports and all are tested and get knocks on doors at made hours, what the GAA players have to do isn’t too bad tbh.

Anyway the player was Kerry’s Brendan O’Sullivan and he failed the test after last years league final. 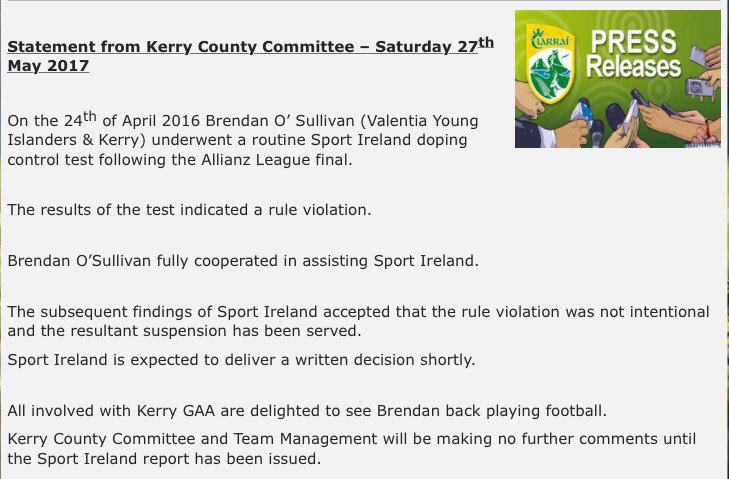 Will we get our League title back??? Keepers of the flame …

The point is that amateur players are being held to account as if they were professional and paid. It is amazing, and sad, that our thinking has been so conditioned that we take this as 'normal '. The GAA is going down the wrong road and it’s going to end very badly.

That question is right up there with ‘Mr. Smith. When did you stop beating your wife?’.

All amateur sports in Ireland are the same not just the GAA that gets funding from Sports Council. The anti-doping is for all levels of GAA not just Inter County but I doubt tests have been carried out on club players as last year only 97 tests were carried out on GAA players. Its also a condition of eligibility for the Government Eligible Expense Scheme and all county team support personnel (e.g. managers, coaches, medical personnel, nutritionists, psychologists, officials).

Kerry doping, Dublin financially doping. The only fair outcome is to take all titles off both counties and give them to Kildare.

The point is that amateur players are being held to account as if they were professional and paid. It is amazing, and sad, that our thinking has been so conditioned that we take this as 'normal '. The GAA is going down the wrong road and it’s going to end very badly.

No offence Iomaint but I think your post ends badly in suggesting this will end very badly. How will it end badly?

Amateur players should not be subject to professional rules.

It has already ended badly for Thomas Connolly. And Brendan O’Sullivan.

Because in many counties, lads already refuse to play for their county, with all that it entails. This is happening already. It is going to get worse. The drug testing is only a small part of it but think of it. If you were a teacher. On medication for some condition. Playing intercounty. You fail a drug test because of your medication. Of course you’d be cleared. But your good name?? Is it worth That?

Why are they professional rules? Can you not cheat in amateur sport?