I hear some senior and junior teams are back training in Dublin. i cant see a the season going ahead as normal

Feck all else to be doing these days but training. Good for the head too. There will be some sort of season so better to be prepared than not i suppose

Good for the mind and body if nothing else. It’s been a long old year

Say it will be championship / cup again

Was it mentioned elsewhere that club leauge will run alongside inter county league, then club championship in August?

Yeh it looks like that, February to July for club league and inter county season. Obviously covid depending

ah there will be a season, just possibly a start and stop one but IF vaccines are gotten out sooner rather than later and we can get the cases down low enough to stay in level 2 i reckon season could be played as normal, just maybe a more condensed one e.g. smaller leagues split roughly by north and south to reduce travelling and number of games to be played, when you consider dual players lads have no spare weekends for 10 months of the year

Games are possible in level 3, is that correct?

they were during the summer i think, not sure what the gaa’s stance is atm…

Club games are supposed to be only allowed at level 2. The plan is however a joke and needs to be redone considering that it was broken at its launch when they put Dublin at level 2 but wouldn’t allow pubs open (which was permitted under the plan). Intercounty/Elite sports (soccer & rugby) should also have not happened under level 5, but that seems to have been changed as well, although the plan as published still says that they are not permitted. 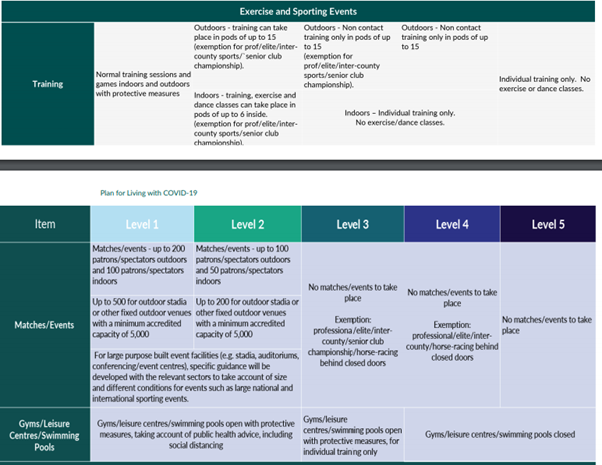 yeah its all over the place, clubs will be allowed train and managers can claim expenses but no matches can be played, its good for the body and mind but kinda defeats the purpose of training with no guarantee of games in next 3 months and no club team needs a 3 month preseason…