Missing. Everything but the Guile

Ah Jaysus … did nobody get it …

Ah I got it alright, just didn’t want to be encouraging you.

A big handful. But Gilroy laid the foundations for alot of these lads.

Not taking anything away from Jim best manager ive seen but Pat deserves a huge amount of credit.

Yep.
Gavin’s biggest achievement pre-15 onwards was integrating a good few raw talents into a n All-Ire-winning squad and playing a completely different style and tactics and winning Sam (and a Nat League) at the first attempts.
The risks he took that year, very few if any teams could have shipped 3 very damaging goals early on like we did to a highly motivated and confident Kerry team in an All Ire semi-final and win. The way Gavin kept his cool, and the players did likewise because he created the environment for them to do so, was remarkable.

Whatever about what happened the following year that was brilliant and to overcome the momentum and national empathy that Mayo had that year in the final, with them making by far their best start to any of their finals between the 90s and then, plus getting a goal at a vital stage second half, to still come through, with effectively 13 or 12 fit players on the field the last few minutes, was some achievement.

But Giller put the foundations very much in, to get over the block of winning an All Ireland and bearing a great Kerry team in the final, that’s never to be devalued in terms of making everything that followed possible.
Any regrets about 2014 with Gavin, and I don’t mean so much that we lost but rather that our style of football failed that day, were made up for when we subsequently beat Donegal a couple of times and beat Tyrone in style in 17 & 18.

We were in the manure long before them lads .

Not taking anything away from Jim best manager ive seen but Pat deserves a huge amount of credit.

agree completely. never openly talked about but i seem to remember refrences at the time to himself and john costello beavering away together at structures and behind the scenes administration in general. reading between the lines of course but that seemed to be the gist. the mark of the giller probably endures as the mark of jim fades.

We were in the manure long before them lads .

correct. and pillar caffrey gave everything he had to dublin football. he brought great organisation and put out well prepared teams that just weren’t good enough… he mightn’t have had the vision to dismantle a culture of under-achievement that was years in the making but he left plenty of good stuff for giller to pick up on.

He got us back from the brink post-arseboxing era… The win against Laois in 05 in a game we often looked like losing should never be underestimated. In hindsight we can say Laois were brutal but they had Micko and a load of talented graduates from underage. They really could’ve had a spell of Leinster dominance, and we really could’ve stayed stuck behind

Wouldn’t agree with all of that . Initially a huge improvement on the Lyons debacle in 03 and 04. But lost their way after 2005 where we played some great football but were unlucky against a brilliant Tyrone side .

Marching to the hill , too much of let’s go to Coppers after beating some shit kick a bucket county in Leinster by 20 points

too much of let’s go to Coppers

Wasn’t it “ See ya all in Coppers!” that Bryan Cullen said after winning Sam in 2011?

If it means we’ve won another All Ireland, I’d gladly hear it every year

First of the stories behind Jack return, that I’ve read anyway 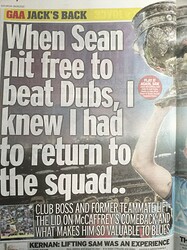 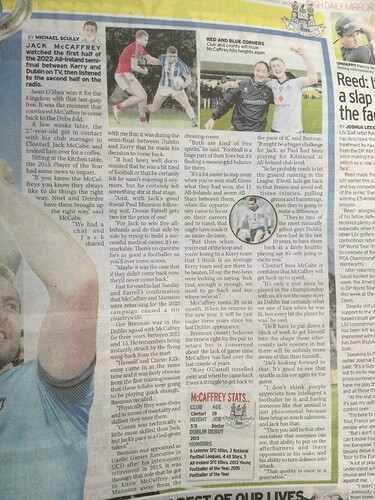 But the 2011 final was…… well for most of us anyway, who knows what you think? You’d probably deny it just to be your argumentative self…

I left when we were 4 points down near the end. How did it turn out in the end?

Fair is fair, Giller did lay an important foundation and Jim Gavin did pretty good work with the Dubs but when the credit is being divvyed out I never seem to get any recognition.
What about me and the other 15,000 or so core Dubs supporters ?.
Without us there would probably not have been … Football League finals set to go ahead in 2023 after Central Council meeting...

A proposal to abolish all four Football League division finals in 2023 was rejected at a Central Council meeting in Croke Park today, with strong opposition coming from the players representative body, the GPA, among others.

Both finals pushed back a week compared to this year