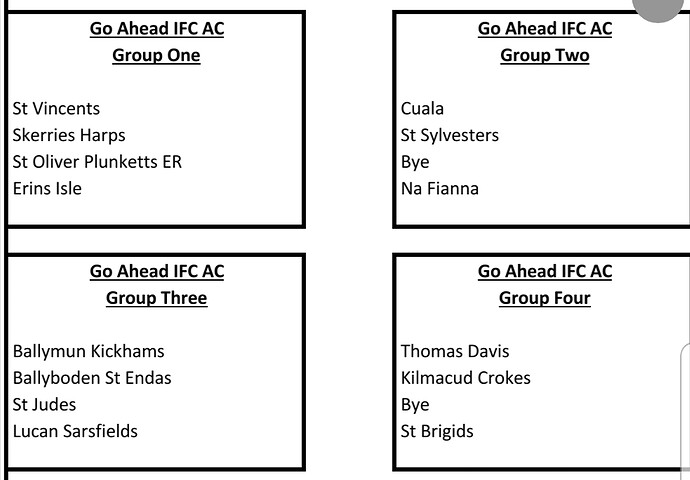 Don’t get why there is still byes in this competition… Push up from jfc 1 etc etc and flush the byes out.

And before teams give out about who gets promoted this championship was decided 3/4 years ago.

Should have promoted the two J1 Finalists from last year, byes should be avoided at all costs

Td 1-12 crokes 3-7 very good game of football, not sure refs name but he was excellent

You beat me to it … What is the point of that…

Isles struggle in Div5, they have no business being in this championship in fairness

Davis are div 5 and crokes are a top div 2 side, nothing between them this or last yr in the semi

Are plunketts not Div 5 also

They are indeed. Alan Brogan togging for them. Ross McConnell too. Their 1st team could have done with them both on Friday.

Not sure tbh. Only heard the 2 other lads were. Played against Paul a few seasons back and let’s just say he wasn’t the same player he was in or around 2011 when he was with the Dubs !

Most likely. Was tongue in cheek. Then again the Seniors could do worse than look at a few of them, going by that scoreline in the Inter.

Any results from this?

Boden seem to be moving well

Would that be their Div 3 team?

This competition is between Crokes, Boden and Judes.