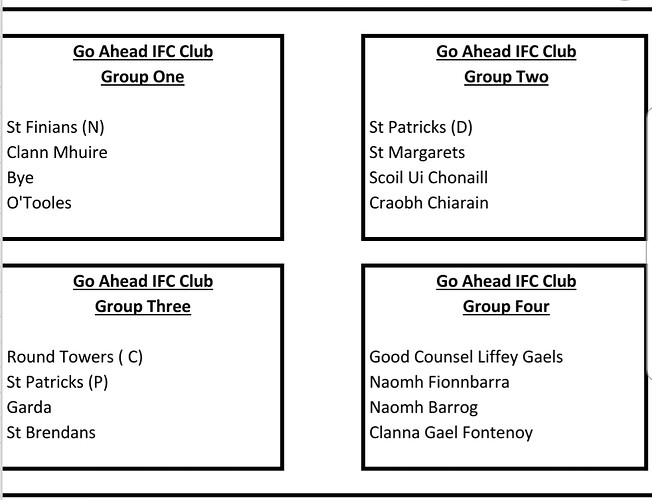 Id give Barrog a chance possibly getting known as a hurling club these days but have some decent footballers , like Fionnbars a fair amount of duals as far as I know , injuries could play a massive part

Serious gaps in divisions there . div 2-6?

I totally agree. Saying that, I have a recollection of you saying before that league should not determine your championship because the leagues are glorified challenge matches?

Championship structures are a mess across the board in Dublin .

Byes, lob sided groups and teams way out of their depth are the order of the day I think

Are the groups really that lop-sided though? I guess Group 4 is with Fionbarra, Barrog, and Clanna Gael Fontenoy (who have two former Dublin underagers in their panel.)

Totally agree and was only winding you up. The last few years of playing in the D championship when we were div 9/10 came up against teams from div 7 or even 6 I think who invariably went on to win those, unless of course a team mid table in Div 11 S somehow managed to win it

But scoil and ballyboughal are div 2 I think ?

Craobh are div 5 at least . Brendan’s too I think .

That’s some gap in fairness .

I’d need a pdf for what divisions they are in tbh. Didn’t realize Scoil were going that well. Craobh and Brendans contested the junior final from 2019 while St. Pats Palmerstown and Round Towers Clondalkin were relegated from Senior B in that same year I believe. It depends if you think 2nd teams of Senior A/B clubs should be competing at this level I suppose.

Craobh are div 5 at least

You could not compare Craobh’s League and Champo football teams historically, to be fair…why the comps should be considered differently

Well I think the all county championships are a shambles in their current state . But that’s just my opinion . They are totally lob sided and a lot of byes there

But I can understand why it happened . The piss was being taken out of the regrading system which simply was never policed properly

I probably would have simply put the second teams of the super clubs ( Boden , crokes and Jude’s probably ) into the senior championship rather then the current structure

But as said that’s just my view . The junior a championship this year has 10 teams only I think ?

Some championships only have a handful of teams in them now

Central council ruled that league and championship link was to be broken at least 10 (if not more) years ago. I suspect it was to free up players for inter county games and make leagues run off without IC players.

In most counties (except Dublin) the league is only a warm up competition, so lots of counties were happy for this development to take place.

I think it was actually closer to 20 years ago!