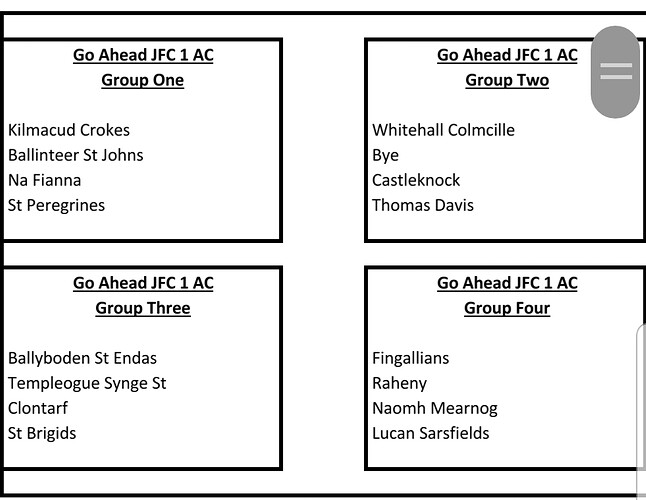 Any idea of the divisions each teams are in? Mearnog are div 7

Open to correction but I think these are the divisions:

Could be Lucans Div 4 team either?

Thought that at first, but I think I saw they’ve a team in Inter which I’m presuming is their division 4 team

They do indeed, that makes sense so

Clontarf would have to be the favourites here after winning AFL4. Hard on div 6 and 7 teams to get any results against teams 2 or 3 divisions above them.

All county a mess. Same with inter - are Erin’s isle (afl5) still in inter? Playing teams in AFL2.

Clontarf beaten in the Final last year so you’d have to put them pretty close to favorites now having had a league under their belt as well. Crokes, despite being poor in AFL 4 this year will no doubt push anyone close come Championship. I watched them play Clontarf in a semi final last year, a brilliant game, far higher quality than what you’d expect in Junior so if they meet again I’ll be going to watch it hopefully!

You would have to back that Clontarf team alright, seem very strong based on both league and last years championship. Not sure what happened to Crokes in the league but can never rule them out either.

Would give castleknock a good shout as well having beaten Clontarf in the group stage last year and having a decent league run.

Definitely wouldn’t be ruling out Thomas Davis, seem to have walked through everyone in division 5. I hear they’ve a good mix of recent minors and lads stepping down from the first team. A shame there’s no league promotion this year (as far as I know) as wouldn’t surprise me if they belong right up there around the top of division 4.

That team are inter championship

Oh yeah, forgot they had two division 5 teams, my bad!

All county was ok the first year or so . Been a shambles ever since . Lob sided groups , limited teams …

A solution was needed but this was comfortably the worst option

Agree completely. Load of byes in the competitions.

Removing the teams has also diluted the standard of the club championships.

Funny you say that as you were one of the biggest advocates for it at the time.

They should’ve left them as they were. There was anecdotal nonsense that second teams from bigger clubs were being packed with senior players which when examined didn’t even stand up to the tiniest bit of scrutiny.

It certainly did stand up. And it was a bigger problem down through the Junior grades. Most Junior clubs are happier now that they are getting a fair crack at winning championships not like before.
It was beyond comical that there was a time, not so long ago, that Dublin’s representative in Leinster Junior Championship was more often than not a team eliminated at preliminary round of the Dublin Junior championship.

Still got the scars

I agree with your second paragraph.

There are 3 division gaps between teams under this arrangement.

I’d go back to the league system deciding championship status. Wasn’t perfect but better then this

Completely logical decision to go to this format. Needs a few more years to bed in and level out but should become rock solid.

Can you point out the excellence in it ?