Pats beat Raheny by 9. Am I right in saying it’s head to head in the groups, if teams finish level?

Heard classic Finbars living up their reputation as a gentle, fair and respectful team.

Anyone able to get the Refs record sheet from last night?

Sounds like a great game was had. Both teams thriving at the moment. Great to see. Good luck to both teams!

Yis have the group won (yis cannot be caught).

Might want to rest a few for your last game…

Who finished 1st and 2nd In their respective groups?

Pats won group 4. Runner up spot will go to the winner of the Raheny and Garda game. The county website says this wasn’t played this morning due to covid 19. Presumably as a precaution, due to the positive case in raheny.

This was Whitehall’s Division 11 team, a great win against a team three divisions higher in a closely fought affair

Fair play. If it’s the winners v runners up in the quarters, group 1 v 2 and 3 v 4 as has been suggested in other threads, Pats v Whitehall is one confirmed quarter final

Have dates been confirmed?
I would have thought it would be an open draw between the 2nd seeded teams to play away against first seeded teams? Similarly like the hurling?

Quarters are down for the 30th August. Not 100% sure on what way they are drawn

Any score from Clontarf Crokes?

I would imagine the draw will look like this;

Draw and dates have been decided, what divisions are the teams left in? 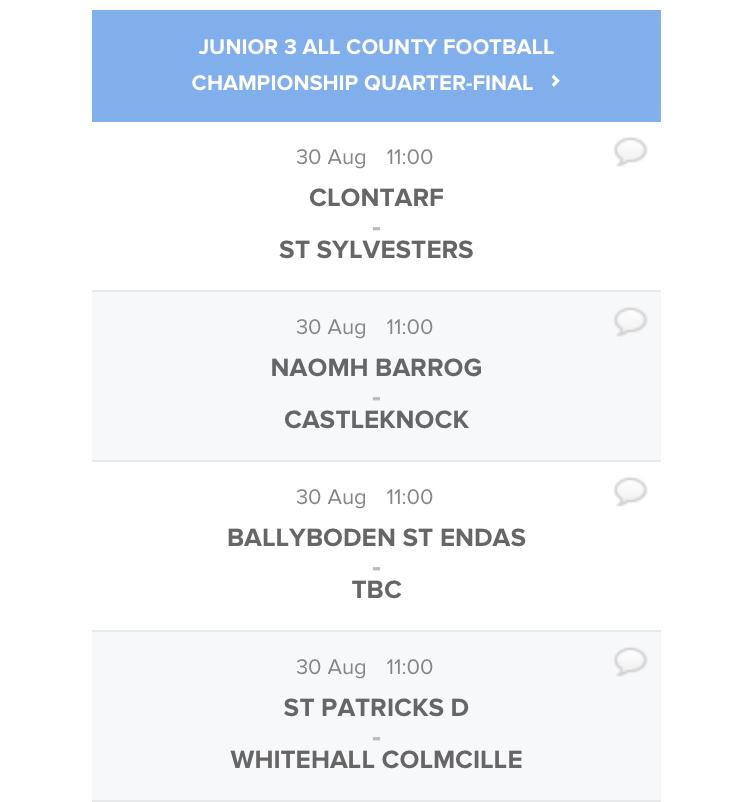