TD lost 1st game to Brigids and won this week vs Peregrines.

Castleknock lost well against Crokes last week and beat Clontarf by a point on Tuesday night having been 4 points up and cruising until a penalty was given to Clontarf (although a lot of spectators and players thought the ref had initially given a free out).

Jaysus that is bad luck on Fingallians! I’ve seen both Crokes and Clontarf play a few times over the last few years, I think that is going to be a decent game. Who would be favorites for this Championship?

how many teams go through

1st and 2nd in each group

Hard to call but you’d have to think one of the division four teams. A lot of teams with much deeper squads though this year as no one is traveling and everyone wants to play after Covid.

Castleknock finished highest in the leagues last year but still need to get out of their group. Kept it very close against Crokes in the semi last year and game could’ve gone either way, but will need to step up their performance again, haven’t played near as well yet this year. If Clontarf get out of that group though they may well challenge too.

Been a while since I’ve seen them play but I recall that Raheny team being quite strong.

Who knows though, lots more players involved this year in most clubs, no teams have any momentum from previous league wins or anything. Crokes were a division 5 team last year and won it, so no guarantee a division 4 team will win it this year.

That Raheny team were good whenever I saw them, they had two brothers (names escape me) at 11 and 14. Both in their 30s former Seniors but lovely footballers and heavy scorers so if they still have them you’d have to give them a chance alright

Thats the lads, always very impressive when I’ve seen them

Donal and John. Donal got called up to Dublin squad under Pat Gilroy but broke his arm. Great football brain.

Ye the two lads were class against us. What happens if were ti draw with templouge ? Presume it goes to pts difference.

Not sure what that does to the other groups but believe that puts Clontarf and Crokes through ahead of Castleknock due to points difference between the 3 teams in their mini league as all are level on points. Castleknock understandably annoyed to be out after winning two games but, playing poorly against Crokes and allowing Clontarf back into it and only beating them by one when it looked like they could’ve taken a 6/7 point lead clearly cost them.

Anyone at the Crokes and Clontarf game? Were Crokes resting lads given they’d have been confident enough about going through or did Clontarf just step it up a gear?

Mearnog 4-7, templeogue ss 4-9. Great game for the fans I suppose with lots of drama and goals. Absolutely gutted to have lost this but tss are a good side and will be hard to beat.

Hard luck, seriously put it up to them even with a difference of 3 divisions, ye may not have won it but still love to see how tight it was showing it ain’t all about the division you’re in

Think Fingallians would be in agreement that the ref in the game against castleknock was fairly shocking. Ruined the game blowing it up for the slightest contact on a player, even the players were laughing at some of the frees they won.

Well it depends what they’re shouting. This business of shouting how long before the ball is even on the tee is head wrecking.

In fairness can understand that, shouting at the ref is one thing, but it was shouting in general like at other players or at the keeper, yelling left side or anything along them lines. We were perplexed. I mean, if a ref said that at senior level, nevermind intercounty in croke Park for instance, I’d think the ref would be laughed off. Have never heard it happen at all at any level

Does anyone have QF line up? 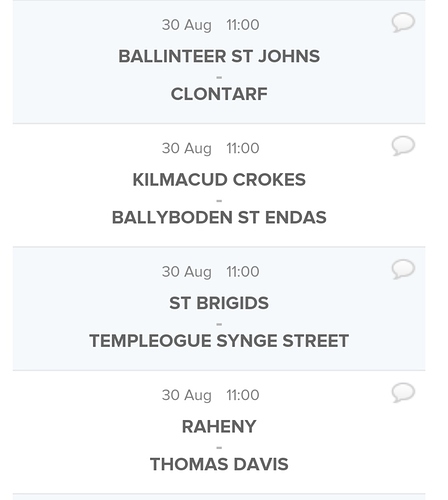