Is the cup only for teams who don’t get out of the groups?

Hasnt been confirmed yet, there are dates set out as Cups right up to October on the revised calender, 5 days in hurling and football

They don’t have the players simple as , they may have the will but having played bothLucan would be miles ahead of Parnells , FairPlay to the Nells if they prove me wrong but the team we played against on Sunday were a serious outfit 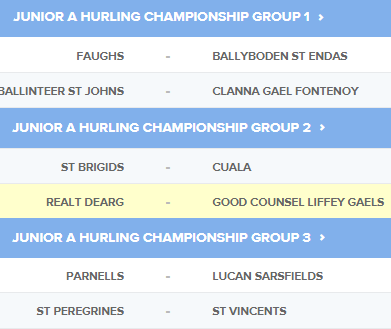 Best of luck to our guys tonight v Vincents looks like it will be a cracking evening for it , hopefully carry on the good hurling from the Lucan game

Are clubs actively restricting numbers for the likes of junior games? I know senior is ticket only, even at club grounds but given the appetite for games its likely you’d get 200 bodies including players at a decent Junior A game. Midweek might lessen the crowd but if the likes of Brigids and Peregrines had have been drawn in the same group that would surely attract big numbers. Hard for clubs to manage

Its the elephant in the room that the GAA are not addressing. Junior/ Inter hurling/football on a fine evening like this will attract big numbers. A local derby etc and you wont be long going over the 200 mark. Im sure the GAA have covered themselves by saying clubs need to control their numbers but how are you going to control numbers coming into a public park for example? Head in the sand stuff

Yeah I agree. Really is crazy stuff, impossible in my view to police pubic parks. Another potential situation is in club grounds where you might have teams training midweek. Brigids have 3 pitches. Are they supposed to cancel training for any other teams because they are hosting a senior club game. I know its not a GAA rule but it just makes a joke of the 200 person limit, that includes 30-40 lads in close contact for over an hour.

I’m sure that lads training would be classed as a seperate gathering.

Half time 2-6 to 1-7 for peregrines, good enjoyable first half , anybody’s game

Clanna Gael one to watch, picked up 1 or 2 handy country lads too I heard

That would be enough for me to shout for someone else

Good scoring in the realt dearg and GCLG game.

They were good last night - different team than previous years.

Very strong in midfield, Number 11 & The 2 corner forwards will cause problems for teams.

Anyone know who the 11 is? heard he is from Kilkenny but not sure.

I heard they got two Kilkenny lads up for college in Dublin , both serious hurlers played with Kierans and one definitely from O Loughlin Gaels

Very surprised at fellas leaving clubs in Kilkenny to play in Dublin - unless It’s football. I’d say not playing for the parish down there is as treasonous as singing GSTQ at a karaoke night.