It’s a forum posters are entitled to their opinions… if there is a solo there fair play it’s a cracking goal, inconclusive watching it back really. Ignoring that play If you think the ref had a good game you d prob want to watch it back yourself.

Howiya ref😅. If you look closely along the end line there is a solo the ball pops up and she brings the ball over head and goes between the two defenders. TD number 5 blocks it as camera behind

In fairness you can tell from the TD players reaction no called for it. Quality goal.

I never mentioned anything about the goal chocolate lips, I said he was never in control of the game and let the constant fouling occur. I also said it was a great game of football so don’t be replying to me with your crap… I’ll say it again, great game of football, great for ladies football… maybe they should have went with a female ref

1 thing he did well was let the game flow and played advantage but after the play to get a handle on the game and stop the fouling would be take a name or issue a yellow card. Just because you play advantage doesn’t mean the foul didn’t occur… I’ll expect your reply later in the afternoon, by the looks of things you had a few shadys on board and got stuck into the phone

You must be in the refs fan club at this rate! Good luck.

Anyway let’s not make it all about the ref…

From a neutral’s point of view, I thought it was the best final we have had for a couple of years. Both teams went out to play football. I thought the referee did a good job as the women have been calling for a bit more physicality in the game. There was no outrageously bad tackles. Congratulations to both teams for an entertaining final. In fairness to Crokes they have been knocking on the door and their night came last night and Thomas Davis proved that their route to the final was not a fluke

Maybe he sits at the same kitchen table !!!

So Crokes’ chances going forward in Leinster? Monkey off the back yesterday winning in Dublin for the first time and Dunboyne, will be a big challenge (I’m assuming they win in Meath) albeit without Vikki Wall. Concentration might be a concern. Meath only played semi finals today so they’ve probably 2 ish weeks to go for that game?

Royal Gaels won’t be easily beaten in Meath, Dunboyne probably favourites but far from a sure thing.

I genuinely think Crokes tackling might hurt them, all the Leinster refs are going to tick easy and will give more cards 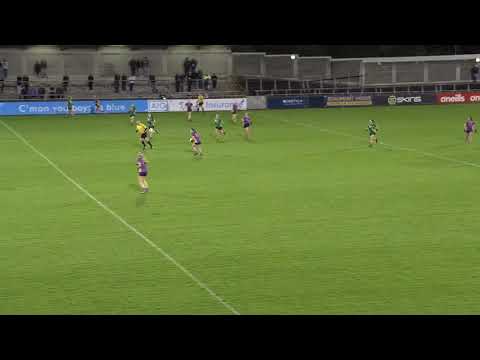 Hope this link works to another view of the ‘Double Hop’ goal !

A quick nod to ref and umpires may be due and we can get back to discussing the quality football game.

Well that’s that then! Great goal!

Your first two sentences are magnificent.

Clear as day it’s a good goal. In that 30 second clip you can hear both sets of supporters moaning at the ref, and it seems a load of them missed a perfectly clear solo too. Who’d be a ref eh?

And I and many were wrong .

Crokes will have a good chance in Leinster depending on the draw. 1-2 “home” games would help .