They bet offaly in the final at u14

You cannot compare the two. There was a study done in DCU that showed no Team who’ve won the Tony Forristal has ever gone on to Win the Minor All Ireland four years later.

With the change of age group to u17 it might be a bit more relevant now??

You cannot compare the two. There was a study done in DCU that showed no Team who’ve won the Tony Forristal has ever gone on to Win the Minor All Ireland four years later.

Interesting, there used to be a very obvious form line from u21 all Ireland wins to appearing in a senior AI final, can;t remember the stat exactly. wonder whether that still hold up.

At u17 still a child, more often still in secondary school and still dependant on parent’s etc etc.

U21 an adult, usually these days 3rd level education and part time work if not full time working. And if not living away from home more independent.

The differences in us all in the 17 to 21 age bracket is huge. This all has an impact on players. Raw skills and physical size when younger sets you apart from peers. The bit between the ears comes later and separates men from boys.

Old thread here about minor teams of yester year. When you look back not only did some lads not make it at intercounty level some totally fall away at club level. The more and more i see i think too much too young when people judge u17/u18.

I hope they bring back u21 because that is the proper yardstick to measure talent.

I used love the minor games before a senior . And then would always remember certain lads who stood out and look out for them at senior in the years to come.

If the Goal is too produce Senior IC players, IMO they should keep U.17/Minor purely as development & scrap AI competition.

Have U.20/21 instead, any lads good enough between Minor & U.21, let them off to Senior, by the time lad’s come out of U.21 they’re better developed etc for Seniors.

With all the underage competitions intercounty it is not the be all and the end all to be winning them. With that said you dont wanna be hockeyed out the gate either.You will inevitably lose some talent but as a whole a lot of the good lads stick at it. If you look at Dublin underage leagues over recent times from say u14 to u20. 4 of the most successful clubs will be Crokes, Boden, Cuala and Na Fianna and they are probably the top 4 senior clubs.
The u20 competition is now like a development competition and has lost its value because the best players are now not involved with their counties. We didnt have a great year at u20 but im optimistic several lads from that team can be developed into good senior hurlers…some will be needed to step up next year.

From a developmental viewpoint the one skill we are so far behind other counties is winning the ball in the air…particularly from midfield up. Ironically the lads we lose to football as dual players are in many cases ball winning forwards.
We are going no where though unless this particular skill deficit is addressed from an early age. Not being able to win your own ball means you have to go short every time…makes us very easy to play against.

Absolutely. It starts from a young age too. I have lads playing U13 and U15. Any time they have played blitzes or challenges against teams from other counties, they seem to win the ball on the ground, but lose any aerial battles.

Apart from Raheny last year that is

Round Towers Clondalkin won the Minor A double either 2003 or 2004.

Forgot that think it must have been 04 . Brigids won it in 03

I didn’t say they were the most successful club I was just making the point that good underage structures in those clubs has contributed to success at adult level…Cuala had some success in the 2000’s which contributed to the senior teams success thereafter. Off the top of my head they won 2011 u16 A championship, 2009 or 2010 an u15 A championship, an u21 A championship in 2009. They’ve won leagues division 1 leagues too and other championships. Competition has increased in the last few years and other clubs have emerged and they aren’t now hitting the heights they did in the last decade.

Would love to see Offaly win this, they seem to start slowish and grow into games 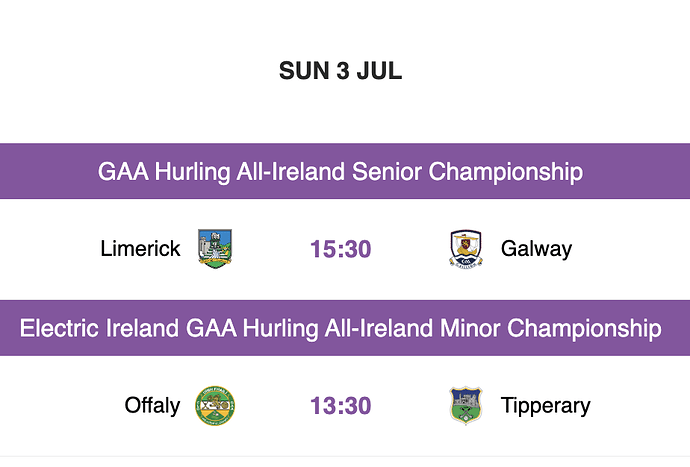 The cream of U-15 club hurling in the country descended to Dublin last Saturday as the Division 1 finals of the John West Féile na nGael took place at Abbotstown and Belfield.

Thurlus og won it out in the end. 2 13 to 3 points winners over Ahane.

Very impressive, must be some team