I think people are losing the run of themselves here. There are just a few clubs capable of “winning” Dublin A Hurling. Top Tier are BBSE,Crokes, and they are always going to be there, and Cuala will always be at the top for the next 6-7 years with that team. Everyone else seems to be an “also ran”. 2nd tier are Na Fianna but according people in this thread they don’t know how to win, and CC might be getting there (?), but hard to see them ousting the top tier long-term.
3rd Tier is everyone else. Vinnies are going downhill in hurling and nothing much to show in the juvenile ranks. Judes /Brigids wold need miracles to match the top tier, as would the rest of the Teams in A Champo. Judes will be lucky to still be Div 1 next year.
So don’t think by dropping it to 12 or 8 that it will become Competitive, that’s not going to happen, just that the margins may (may not) be quite as big. But that is irrelevant, if it remains the same Tier 1 teams winning it ultimately. And that is no different to any other county senior hurling championship in Ireland.
The same applies to Senior A Football in Dublin too. Just look at the League outcomes in Div 1 in both codes. The results tell the story.

If you don’t accept that to be the case, then put your hands up for a “Graded Draw” rather than open draw scenario. Most of the teams below Tier 1 only do well (Q/F placing?) in any particular year on account of the luck of the draw, and not being pulled into a group of death.
There’s a fair bit of snobbery going on over the last 4 days from Club people who should look at their own recent haul of silverware before pointing at the lack of it in others .

People aren’t complaining that only a handful can win, well maybe some are, but that will always be the case (although the list of potential winners does shift around from time to time). What most people are saying that the turkey shoots over the weekend are not doing anything for dublin hurling. the good teams arent improving from these games as it’s too easy and the smaller clubs arent learning anything from a hammering like that.

Vins are in much better shape than they were five years ago. Under age success does not translate to senior. How much did players on the current Cuala team win at under age? We’re tipping away nicely looking for a few players from every age group. Winning underage championships not the be all. Look at how hard Na fianna are finding it to translate under age dominance into senior success.

Ten teams are reasonable competitive. That should be the championship there.

Winning underage championships not the be all. Look at how hard Na fianna are finding it to translate under age dominance into senior success.

Exactly, Craobh buck that notion very obviously. Have produced some good young players without any notable success underage. As someone said on the county thread. you can have a couple of very good players on an underage team but unless the rest of the team are up to stratch you can get beaten by a good 15 with no real standouts.

Ten teams are reasonable competitive. That should be the championship there

Assuming 2 groups of 5, Does 10 teams mean a bye per team per round adding on at least 4 weeks per group. Compound that with the usual arguments and it could actually be drawn out cos of the reduction to 10 as crazy as it sounds

Whilst I think 8 is the proper number, delegates would have to settle on 12 to avoid free rounds etc. As they definitely wont go for 8 teams as a first go.

76 posts were split to a new topic: New SHC Format

Here are the Quarter Final fixture details for the Dublin Senior A Hurling Championships, following the completion of the Group stage today #DSHCA https://t.co/U1O4oJlB5A 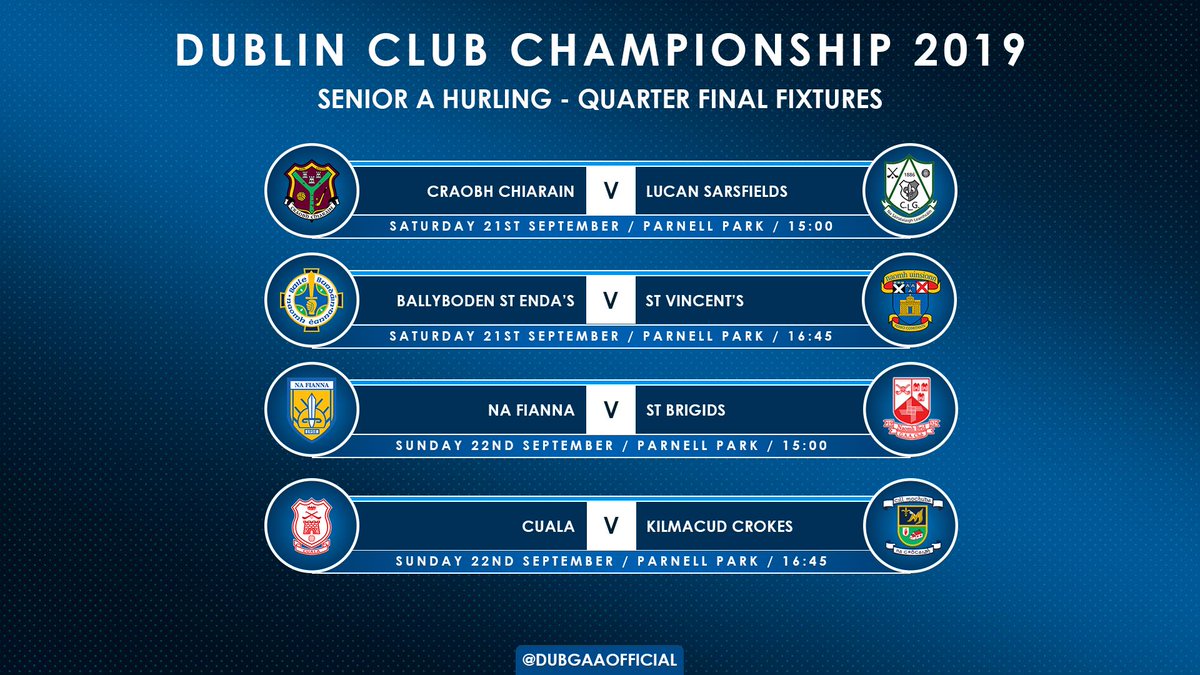 Are any of these due to be shown on dubs tv?

I think vins might upset boden. Brigids could be an upset too.

I think Boden or Cuala are a league above the rest

Jesus I hope we do!!

Should be 4 very good games.

Craobh v Lucan: Lucan had a good win over Whitehall at the weekend, by bigger margin then i would have expected, so lucan will fancy their chances against a resurgent Craobh. Craobh whoi havent seen since their impressive win v vincents seem to be ticking along nicely with a good win over plunketts. they have a nice gell now of younger players and Crabber pulling the strings. Think craobh will win this but not by a huge amount.

Boden v vincents: going to be interesting to see if boden keep going with their young FF line for this or whether they have the older lads back. Conor Burke was named at 14 for vins rout or the barrs at the weekend but think if boden have keaney and Paul ryan back they’ll just edge this one.

Na Fianna v Brigids: Brigid’s seem to have pulled together a good set of forwards with everyone fit: O’Sullivan, McGuirk, Winters, Dunne etc could trouble Na Fianna, putting 1-30 on judes is some going (even a weakened judes). Na Fianna were really impressive v Crokes back in april and have Donal Burke back and seemingly in form and the curries seem to have picked up where they left off and in AJ murphy and with the likes of the McHugh, Quilty, O’Dea and Breathnach have a good all round team. Think NaFianna will just shade it.

Crokes v Cuala. probably the tie of the round no idea who will win this one. maybe the revenge for last year factor will get Cuala over the line. Paul Schutte back is a big plus and Con will be back in time for the 1/4 final probably. Hopefully young Ó Ceallaigh will continue his good showings for Crokes so far - think he’s eligible for the u20s next year.

If Lucan can deliver a performance like they did against a good Whitehall team, I think they will beat Craobh. They scored 2-20 and were in hard luck for another goal chance that came off the crossbar. Their backs are good and the goal they conceded was well into injury time.
Craobh have been very good this year and I imagine this will be a very close game.
Would like to see Vincent’s take Boden but Boden probably have the more experience plus stronger panel. Would have to fancy Na Fianna v Brigids and like Tayto I really don’t know how the other game will go!

Didn’t realize that. Will likely do the same at u20 so.

If Lucan can deliver a performance like they did against a good Whitehall team, I think they will beat Craobh. They scored 2-20 and were in hard luck for another goal chance that came off the crossbar. Their backs are good and the goal they conceded was well into injury time.
Craobh have been very good this year and I imagine this will be a very close game.
Would like to see Vincent’s take Boden but Boden probably have the more experience plus stronger panel. Would have to fancy Na Fianna v Brigids and like Tayto I really don’t know how the other game will go!

When Lucan get it right, I think they are potentially better then Boden. So Vincent’s just might have got the better draw coming out of that Vincent’s / Craobh group.

If Kelly can stay hurling well, as has been reported here, Lucan have a hell of a spine. I could see them going all the way.

He’s a very selfish footballer IMO
Doing very well at Senior hurling this year . . . he wont be near the senior football team