Group 3 looks the tightest, there’ll be one heavy hitter losing out.

They seem to be doing the Inter draw too despite saying they weren’t earlier.

Looks straight forward to me, anyone else get through would be a shock to me

Only 2 in that group in all honesty

Clontarf & Raheny not far off going through Id say, rest of them probably as you said.

In fairness Boden and Vins will come out easy enough. Vins management back to normal now.

wouldn’t surprise me if they took Vincent’s, Vin’s in decline and Clontarf a good young fast team and if they have Jack Mc avail id fancy them to take them. raheny could also cause problems if dublin lads are fit, rest are straight forward i think.

Did they get new players as well?

To be fair to Clontarf, Boden only beat them by a point in the group last year, they were a bit unlucky to lose by a point to Skerries in 2nd game & beat Lucan by 7 in final group game. I think there was 1 point between Clontarf & Crokes in the QF last year before McCaffrey was sent off. So, definitely wouldn’t be as quick as some to write them off & they’re back in Div 1 again this year after winning something like 12 league games in a row. Only teams to beat them in the league last year was Castleknock & Raheny.

Vins management back to normal now.

Mullins back as manager I see

Vincent’s will surprise some this year. The problems last year were not on the pitch. Those have been solved. Think we’ll go well enough this year.

I wouldn’t right Clontarf off as easy as that. Hard to know how Boden will be after a long run in 2019/2020 and the jury is out on Vincent’s as to whether this group can reach the heights of previous years.
It’s championship football and you never know.

Wouldn’t write them off but would expect to beat them.

Let’s be honest we would call it a shock if they do qualify.

Here is the draw in full for the 2020 Dublin Senior 1 Football Championship. The first round of games will take place between April 15th and 18th. #DSFC1 https://t.co/hfX9lqoF4U 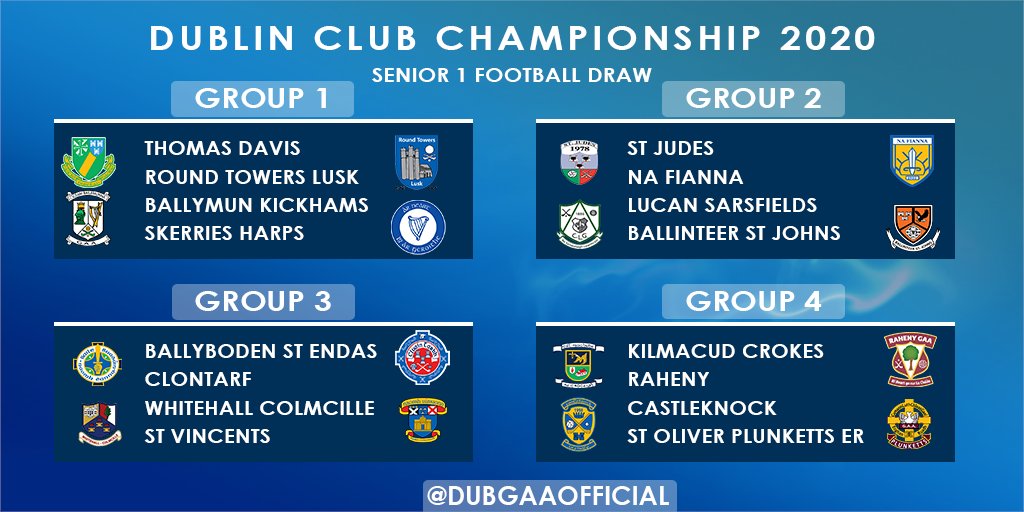 Is the draw 1v2 & 3v4 again this year or different format?

Any idea when they’ll set firm dates for these games?