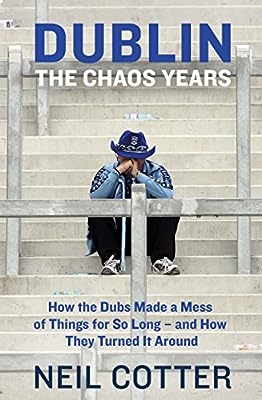 Dublin: The Chaos Years: How the Dubs Made a Mess of Things for So Long – and How They Turned It Around

Dublin has become the dominant force in Gaelic football, setting new standards of skill and efficiency. But it was not very long ago that the county was a byword for underachievement and disorganizati ...

Out in October, looks very interesting.

Dublin has become the dominant force in Gaelic football, setting new standards of skill and efficiency. But it was not very long ago that the county was a byword for underachievement and disorganization. Every year from 1996 to 2010, the Dubs found new and creative ways of losing, of causing their fans to suffer, and of earning the scorn of the wider GAA public.

Based on interviews with former players and coaches, Dublin: The Chaos Years tells the entertaining and sometimes scarcely believable story of how the Dubs managed to make such a hames of things over a period of fifteen years. It also traces the beginnings of the turnaround, as the bad habit of failure began to give way to a healthier culture. Full of frank, witty and sometimes outrageous stories and analysis from the people who were at the centre of it, Dublin: The Chaos Years is a book for every Gaelic football fan.

Jayus , ive seen it all now

.
Id buy it though just for craic.
Never heard of the author , is this the guy ?
Dubs fan according to his bio If that is him, he works for the Sun. On that basis alone I wouldn’t wipe my arse with the book.

If that is him, he works for the Sun. On that basis alone I wouldn’t wipe my arse with the book.

But but but but…Juliet is the sun!

Obviously had loads of time to write his book. There’s never much news in that rag.

Only good for cleaning dogshite one rung below the indo

interested in facts ... not assumed information DONT buy The book about our supposed chaos years..its filled full of misinformaton and slanderous lies. Avoid pass it on

Kieran Shannon reviewed it last week and spoke highly of it. Though if there was factual errors he wouldn’t be informed… Can understand frustrations from the likes of Vinny if he’s being misrepresented

Anyone know what was said that upset Vinny so much?

Anyone know what was said that upset Vinny so much?

In the book the squad under carr would regularly go to the sunnybank hotel after big games "the players would dine on the chinese buffet upstairs, then march down for pints .
"Vinny Murphy is particular is remmbered as the joker in the pack,tearing strips out of his colleagues and anyone who lingered a moment to long in their presence -including the bar staff.

There isn’t much about Murphy in the book at all - maybe that’s his problem?

It’s hardly a major flaw of the book to get the name of a watering-hole wrong.

I’ve read it, and think it’s a superb book. It IS gossipy, but there’s no hatchet job done on anybody, and any past player/manager who get criticised also gets praised by others. It’s very balanced and well-written.

I’ve read it, and think it’s a superb book. It IS gossipy, but there’s no hatchet job done on anybody, and any past player/manager who get criticised also gets praised by others. It’s very balanced and well-written.

Cringe when i was reading about the blue book and players marching linked together down to the hill !!! Wouldn’t you love to be a fly on the wall if philly mac asked JG to look at starting it again ???

I don’t cringe. They tried to do something to deal with the hype. It didn’t make much of a difference but they were right to try to address it

Seems very harsh by Murphy if that’s the only mention. Throwing about words like ‘slanderous’. There was a Chinese in the Sunnybank so I reckon the venue is correct. The guy who owned it at the time was a strong backer of the team and they used to go there a lot.

They tried to do something to deal with the hype.

Yeah by ramping it up !!

That’s what people said in hindsight but I don’t recall many saying it at the time. Pillar and Co and that team got quite alot right too, Gillers team had an influx of great talent and got a break with the way the semifinal and final panned out in 2011.
Its easy to look back now and sneer about it and there were a good few mistakes made but they were trying to do the right things. The hype was as much the media, not what the team or the, Hill were doing on match day. Their biggest fault apart from not being good enough was not being cute hoor enough.

Cringe when i was reading about the blue book and players marching linked together down to the hill !!! Wouldn’t you love to be a fly on the wall if philly mac asked JG to look at starting it again ???

I agree with @5AliveOh. Jim doesn’t have to try stuff like that, because he has the bench-of-immortals to get us over the line. People weren’t cringing with Pillar’s March to the Hill at the time - it ramped up the atmosphere to 11! Pillar decided that the hype will always be there no matter what they do - so let’s try and use it to our advantage. I specifically remember the march to the Hill in 2006 when Mayo warmed up in “our” territory. I reckon a lot of people who now slag off the marching-lark, were in fact fist-pumping the air when it happened that day.

Pillar didn’t have the players that Gilroy and Gavin have. And yet, we were always just a kick away from doing something special. Therefore Pillar and co tried every psychological avenue available to them, to get the team over the line. Another way of looking at it, is that maybe we’d have lost those matches by 4 or 5 points rather than 1 or 2, if it weren;t for all the psychological stuff that pushed the players beyond their natural abilities. I mean, the Kerry team in 2007 were, man-for-man, so much better than us - and yet they only won by a point and could’ve easily lost if we’d a bit of luck.

So the fact is, Pillar’s team just weren’t good enough. That fact was encapsulated in the semi V Kerry in 2007, when we just had no idea ow to play “keep ball” and Cluxton, near the end, faced with rows of static players, lost possession which led to a Kerry point. When Kerry were in the same position, they just hung on to the ball, passing it around and around until the break came and they banged it over the bar. Game over. Class wins out.

But at least Pillar tried.

I’ll chime in here regards what I thought was wrong with the 5+ years leading up to the promised land in 2011. A lot of the same players won the Leinster in 2002, 2005, 2006, 2007, 2008, 2009 and out those winners there was a certain number who thought winning leinster made them superstars. In my humble opinion there were key players who played as individuals on the latter winning leinsters 07, 08 & 09 that waltzed through Leinster and then got a hell of a fright and faded when it really mattered outside the province.

They could be compared to players on a juvenile team that are clearly better than their opposition and knock over score after score eventually giving the opposition awful hidings. However when same players are put under pressure most of the time they dont have it and eventually cave, badly. If you ever see a juvenile team playing in division 4 or 5 and are obviously too strong for the division, yet think they are world beaters, but never progress to business ends of championship or even have a crack at a higher level league. This was Dublin in the leinster championship in the 2000’s.

Case and point being the 2009 match v Kerry. “We” scored a goal in the 2nd half and it eased the damage, however same player who scored clearly wanted to be hailed as a hero by their reaction to the hill. There was no bravado needed, but I guess winning leinsters against relatively poor opposition will do that.

If anyone wants a reminder of the scoreline it finished Dublin 1-07 Kerry 1-24. In 2006 even with Mayo “warming up at the hill”, again it spooked our “individualists” and as a team we shat ourselves, lets be honest.

Thankfully it dawned on a lot players soon after that the Dublin fanbase was quite tired at this stage of pointless leinsters, players swanning around town high fiving each other in GAP and Hollister, it was dude central - with nothing to show for it other than failings outside the province. My how the world has turned since. Long may it continue.