Im sure he has, and two good ones at that.

Can’t wait …I just booked flights home for the game.

For perhaps understandable reasons we have a superb attack minded ball player playing all champo out of position as a sweeper.
I get the angst on Dessie’s part as we are thin on panel wise, especially with full back line cover.
But playing BH in a defensive role when we prob won’t have Con available is robbing more from Peter than we are paying Paul so to speak.

If JamesieMac is back and no Con we should bite the bullet and put BH in and around 11.
I am assuming in this that Davy B is will be OK to start next day and that himslef and Cooper will Marshall defence.
Mick Fitz as much as I love him got turned a few times yesterday and caught out of position (that said he does like an offensive run up the pitch every 5 mins or so which is remarkable fitness from a veteran at this stage). But Mick has to start as we don’t have soemelse to slot in.
Kudos to LGannon btw. Is he left or right footed I wonder ?.
Coops is a warrior. What a brave ball player he is. Not able for 70 mins we know but he for me has to start.

Kerry thankfully still favourites and hopefully in their own heads also. What I saw today and the fact thay they are still favourites is based as much on us regressing than anything else other than Kerry just have to win this year blah blah…

Mayo were as bad as Cork. I think they both scored 3 points or so in the entire second half.
We tactically were deffo not going
for goals yesterday. That luxury we will not have v Kerry, but Dessie knows this

I suppose Conor Lane will be down to referee

Put Deano on the bench then

Would be worried about our defence especially if Gannon or Murchan put on back foot. We are kind of set up defensively similar to pre 2014. I think kerry might go for goals early to kill us off.

Dublin we have to move the ball and go for the kill too. We got 4 first half goals against kerry in league last year and 5 in Leinster final this year. This kerry FB line are poor defensively and under the high ball. 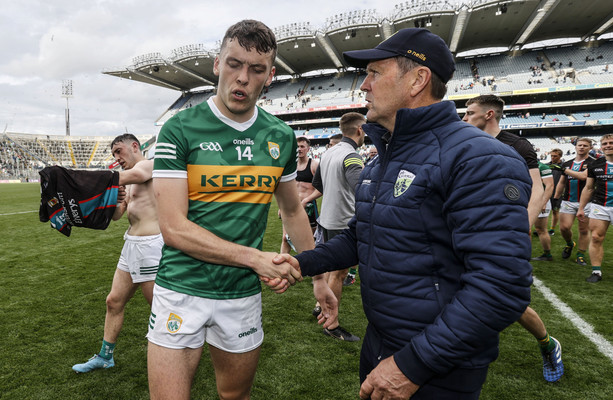 Jack O'Connor: 'These Kerry players have been yearning to get a cut at the Dubs'

The counties will meet on Sunday 10 July.

"O’Connor gave an update on Kerry’s other injury issues.

“Jack Barry strained his calf and Adrian Spillane strained his hamstring in the last week or so so they’ll also be in a race against time."

C’mon Jack, be original at least!

Been hearing that once since 2017. They needed two helpful referees to come within an asses roar of us in 2019.

JS, Fitz or Jameso. Or zonal…
Don’t care, he’s not up to much
JC

Tickets on sale today, but sure what’s the point. May as well not be going.

You wanna toe Dude? I’ll get you a toe…

I wouldn’t expect a full house for this . But who knows ? Kerry supporters will probably travel for it and will probably be more hyped up for the occasion. Kerry will be very confident they can make up for the many losses. Not sure of the mood in the capital tbh

EoD on Clifford? Maybe thats the reason he was brought in. Hes very mobile, fast, tall & incredibly strong too. Oooh its going to be a long 2 weeks. Cant wait.

If Con’s not fit, I think we have to play Kilkenny at full forward.

That’s a bit of robbing Peter to pay Paul, but Kilkenny will do well at full forward, it will also create more opportunities for Costello, and Howard can take Kilkenny’s position at half forward. So on balance, we should gain more than we lose.

Paddy Small and Scully should be on the bench, and both well capable of making big impacts in the second half.

Agree, but its been called for before and it hasn’t really happened bar one or two brief periods. I’m not convinced on the fitness of Clifford, even before he rolled his ankle he wasn’t moving great. Kerry have a couple of lads on the pitch in central positions who can’t track the field, Murchan will be important in this game.

Not sure about Clifford he made a few runs where he looked fine, I think they would have taken him off earlier if there were genuine concerns as the game was well controlled, either way he has two weeks now so I would say he will be 100%

Good. Hopefully a full compliment of players for both teams.

I would prefer he plays, if we are to beat them, beat them with their full team and if we are to lose, well lose to a full strength team too.