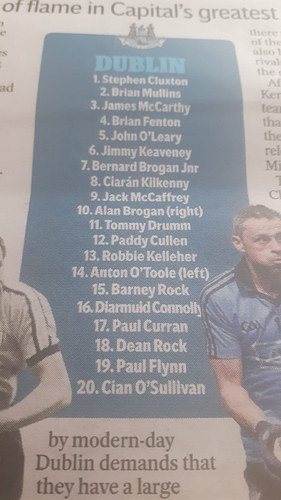 I couldn’t have a top 20 without Ciaran Whelan in it. Maybe just my age and the era I grew up in.

Any opinions lads or would you change anything?

yeah agreed. dessie unlucky not to get in too???

Lads the top 20 is in the opinion of Breheny. Nuff said. Just ignore it.

That’s why I was asking people’s opinions

Some of the positions are a bit odd

Fenton is ahead of Mullins,.

James MacCarthy should be number 1 imo. Think Curran and Connolly too low too.

But agreed, only Breheny. He’s been retiring for the last year.

No need for three keepers , possibly take Cullen out or O Leary for Whelan , thats at a first glance ,
plenty of players springing to mind not there Tommy Conroy ,Tony Hanahoe Charlie Redmond,Hargan , from a more recent time Philly and Kev Mac and Con

Where is Con O’Callaghan?

Where is Con O’Callaghan?.

Think he’s out at Vico Baths with Matt Damon

I actually thought the same thing for a second. bernard Brogan at half back?

Two that could be argued for given the contributions in turning finals are Kevin Mc and MDMA. This could be debated forever, Robbie Kelliher ahead of Mick Fitz, no chance. As I said a debate that would never end.

No Robbie Boyle?
No Wayne Daly?

It’s a fair top 20 and was always going to be difficult leaving personal favourites out and maybe 1 or 2 probably should be there in place of some. I agree 3 keepers is a bit excessive and maybe 2 would be a fairer representation of the era. Maybe I would like to have seen Charlie Redmond sneak in there in place of P Cullen, nothing against Paddy but only Curran is really representative of the 95 team era and they are the most successful team between our 2 greatest eras (70s and current).

McCaffrey should definitely be in that conversation. I’d nearly have Dean over Barney now too but thats probably a generational thing.

DC should be near the very top, crying shame that he isn’t.

I’d nearly have Dean over Barney now too but thats probably a generational thing.

I’d have no doubt about it, whatsoever. Barney was a great player and deserves great credit for that and even more so for passing on his DNA but I would have Dean ahead of him!