Make sure your payment details are up date !

Has a mail been sent out?

Not yet , no details really , just what I’ve heard on gaaboards.

Hard to believe, it seems like only a year since we were getting the 2017 ticket …

120 in November but priceless come September 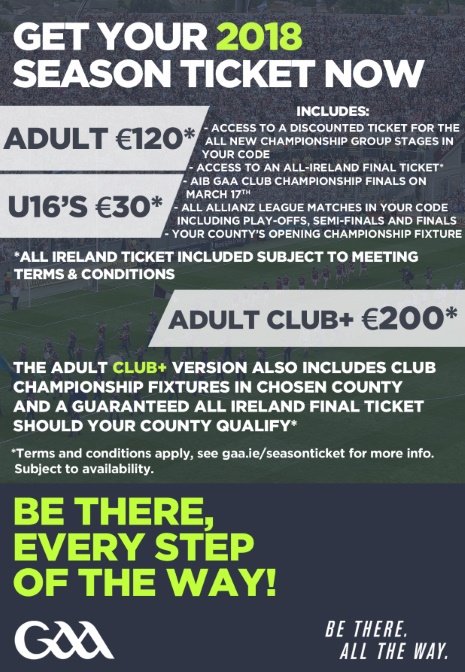 120 is quite the increase.
Hopefully they spend the additional funds on manners & etiquette training for their delightful staff.

etiquette training for their delightful staff

etiquette training for their delightful staff

You’d get more empathy and engagement from the processing staff in Auschwitz.

Can’t speak for anyone else but I’m a gentleman.

Hopefully the red sticker is back for the Club+

I wonder will we get a special 3 match ticket deal for the Super8s??

I wonder will we get a special 3 match ticket deal for the Super8s??

I believe so - I hear they are throwing in a bottle of water, a packet of crisps and a chicken roll for €5 …

Don’t think so , think it might have been around the €100 range .Think thats an increase of at least €40 over the last 4-5 years , open to correction though .

“From €75 when it was introduced in 2009 to €120 now is ridiculous increase in a short space of time. I presume the reason for it is because of the “money spinning” super 8 games will be set you back €105 is you wanted to go all 3 games.”

Remember the sheet of paper the co board used to give out when they were in Belvedere place- a box they stamped when you got your ticket. Cost me 2 quid to join first time and you were entitled to purchase a ticket for Dublin s championship games. Oh how the money men have gotten their teeth into sport. But I agree that gaa in general compared to soccer(Ireland games and what those poor saps pay to watch the prem)is still good value.