Let us hope that the next news we hear from Hong Kong is not of another Tiananmen slaughter,

Shameful is the silence of all our great virtue signallers,

Very true. Now that the U.N. has become totally irrelevant, nobody will intervene or say a word.

Govt slowly turned up temp and protestors have reduced in numbers. This is a dangerous mix as just saw policeman interviewed who is saying they will respond with firearms to protest. No western power will stand up to China as money talks and trade deals would be lost.

Not one of our instantly triggered Pollyannas in Sf or likes of Coppinger has one word to say about this. Frauds.

I’ve spoken about this recently to a very liberal westernised Chinese guy in work. He’s still biased. But makes interesting points. I’ll try get something down from him. On the face of it looks bad and it worries me that someone like him is being pro-Chinese about it. I’ll quiz him again soon and throw up a few answers here

Govt slowly turned up temp and protestors have reduced in numbers. This is a dangerous mix as just saw policeman interviewed who is saying they will respond with firearms to protest. No western power will stand up to China as money talks and trade deals would be lost.

Shocking scenes. Seems to be going on forever. The only real surprise is the Chinese have been so restrained to date, thankfully,

Who would stand up to them? The Uk pretends it is trying but China isn’t interested. China is second only to the USA militarily and it’s a fight the USA is not interested in.

Look at what they are doing to the Uighurs, millions interned, documents leaked show they are cracking down with no holes barred.

When you think of it, the Brits left trouble in their wake, all over this planet.

Sure, some of the tactics of the protesters are beyond reckless and their overall goal has shifted entirely… but then I wouldn’t fancy being assimilated by communist China.

Was mad on holidays there last week, they all had very little knowledge of it they knew it was happening but none of the details. I was watching CNN in the room one night and a report about it came on, the screen went blank until the report was over, was mad to see the censorship in operation.

As lads have said already, politicians are hypocrites not a word about what’s happening in Hong Kong or in Uighur. China will keep doing things like this because they know damn well everyone else is on the world is too afraid of them to stand up to them.

They’ll be just like the USA was, and the UK before then, in their own way. I wouldn’t fancy being in Japan…

From a purely strategic standpoint, the protesters fortifying a university campus was not a good plan, they’re trapped now and will inevitably all l ft inside now will be busted. They had been popping up and moving away when police presence became too heavy.

I was in Hong Kong last year and it’s an amazing city and full of tourists and very Westernised.

All this trouble isn’t going to end well at all

The pro-democracy camp could not have hoped, in their wildest dreams, to have thumped the pro-establishment camp to this extent in #HongKong’s district council elections. Current count 185 to 19!!! #China 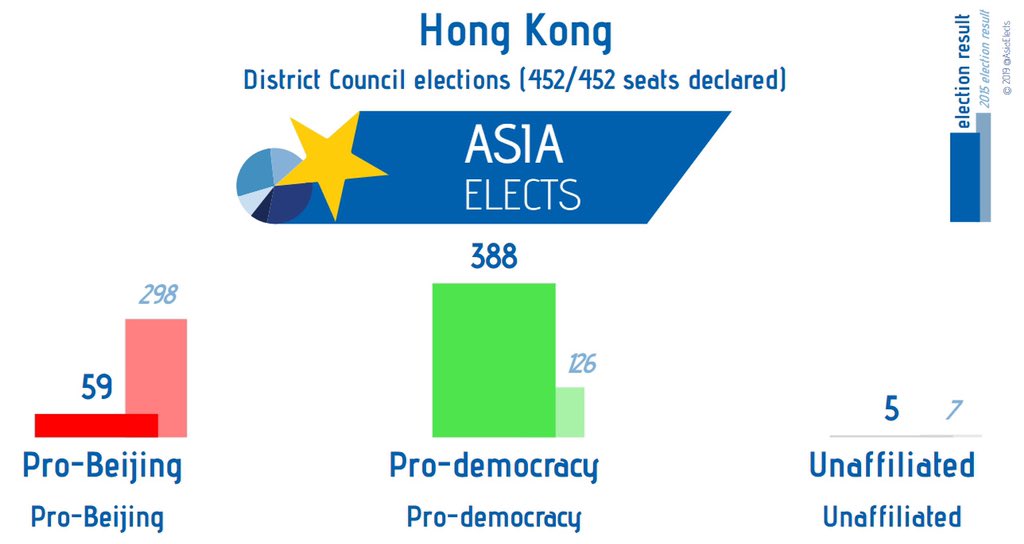 Which is precisely why Beijing is not going to let this democracy lark, spread too far.

Indeed. Majority of Chinese probably don’t care about - or even know about the Tibetans or Uigyirs- but the Hong Kong population is overwhelmingly Han.

As you say, last thing they want is their cousins getting notions as happened when Soviet Union was collapsing in 1989.

This could end very badly. Good to see that democracies are warning Chinese off a crackdown, but if push comes to shove the tanks will roll and no one is going to war over it.

Yes and it’s terrifying. In a funny way, the world was safer when it was Uncle Sam v the Russkies. Neither was going to start on the other. Now the global order is fragmented, the likes of China can do as it wishes. Not that the previous superpowers were nice guys but things appeared to be a bit more predictable. If the Chinese can jail 1.5 million Uighurs and nobody bats an eyelid, they’ll think nothing of butchering the brave students of Hong Kong.

Americans have been doing what they wish since about 88