With a bit of effort a fixture list to ensure dual and single code players can be accommodated could be done.

It could and it should be done. Single code could have a cup or whatever on the off week.

Split the year - football and hurling.

No way should club teams be playing championship games without their county players. The majority of league games are played without I’ll grant that.

Football October to March so
April through to September for the hurling.

Leinster and munster hurling finals on the same day.

Split season is needed for inter County and club players, but really feels like too many big weekends and games are being taken away.

League finals in theory are ridiculous, a league should be a league, but there have been some great days for counties winning league finals.

I find these threads gas

Same lads complain about playing games fixed for electric picnic , Stag weekends or to attend the funeral of their budgie

It’s an insight into Irish culture of the blame game

Most Leagues now have a Top 4 element which are basically money spinners to have semis and finals. A team coming 4th in a league can win it.

I’d imagine if the chap stayed with Laois they could have made a Leinster semi final.

Made the right call . Arguably Ireland’s greatest export to Oz

Kerry’s Mark O Connor isn’t even on the bench

Kerry’s Mark O Connor isn’t even on the bench

I wonder when he will return home?

wonder when he will return home?

He’s first emergency I believe and has gotten lots of playing time this year though compared to James Madden for example. I do think both will return home at some point though.

Have you heard of the late, great Jim Stynes? 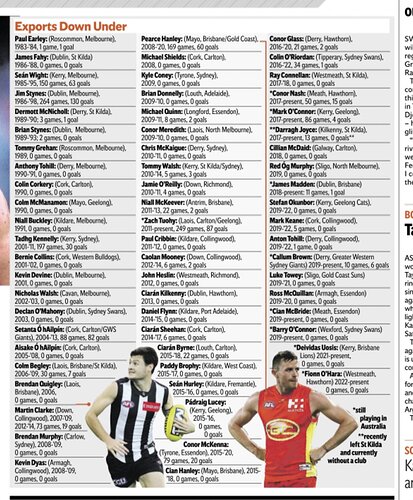 Passed away too young . Poor Sean.