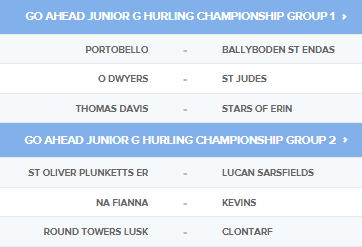 Is that the Portobello team that could be in Division 6 or 7? If so, why are they in this?

Thats a joke if Portobello at
Re in G championship. No team will keep them within double scores.

I imagine same applied with championship as did the league. Someone did mention Portobello asked to go up but we’re told no, I’d imagine it’s a similar story here

In Junior H last year as the hurling team was only set up last year. Won that Cship and now up to Junior G. Like the league, requested to go up a few grades this year but were denied.

Fair enough, thats a county board issue so, should be in E at least, good side

James Gaels last year lost to them with a last minute goal in county quarter so Portobello would by no means be a certainty.
Good side but definitely beatable by someone who doesn’t buy into their hype!

It’s worth checking the other side of the draw and what division each team is in. Complete mismatches in terms of strength

Hard to know based on Division. Ballyboden have pulled out of Group 1, walkovers all round. St. Judes could go the same way based on League but then again could drop players down. You just don’t know who will have what on the day.

That’s not plunketts Div 6 or Lucan Div 7 teams. Portobello will win this handy unless na fianna can muster up a challenge.

Quick question, is that Portobello’s first or 2nd Team?

Only have the one team in hurling I think, only started last year

Are they teams not entered in the leagues?

Fair play, looked an odd championship but thanks for the update. Thought a few (d champo) looked lopsided compared to the football

I’m fairness, if Portobello looked to play higher Champo and got told no, they can only play in the level Co Board allow them. Plus if it’s their first team they’ll naturally be stronger than other clubs 3rd or 4th team. 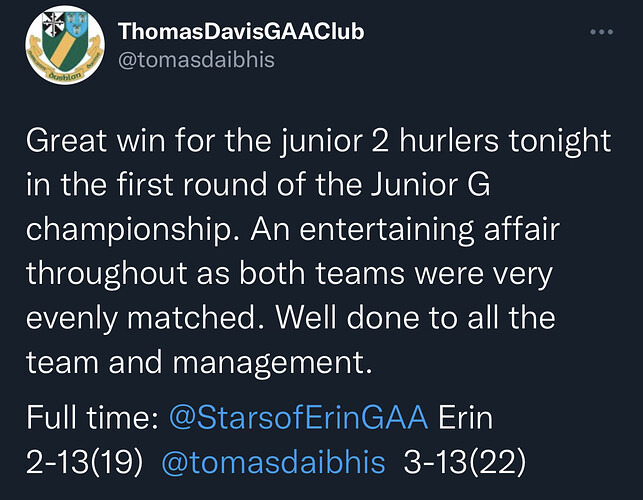 Standard of these games is far from division 10/Junior G. Thomas Davis and Stars both scoring from sideline balls in a Junior G game is far from normal. Skill level is a lot higher than the division reads.

1 after the other from 45 yards out! TD team is mostly our Div 2 19s with some of our old school veterans in the central positions. Excellent game of hurling for Junior G, well reffed too with little frees.