I’d like to se them playing football. Not a one sided slaughter.

John Heslin was on OTB this morning, the Boilers seem to think it will be played in Croker?

I’d like to se them playing football. Not a one sided slaughter

I’m looking forward to the League.

the leinster final? of course it will be, i was only having a laugh.

our first match will be away as well.

Sounds like the boilers shit stirring. I’d be surprised if this wasn’t Tullamore. OTB only place I’ve seen it mentioned

Some of our other quality report sources: 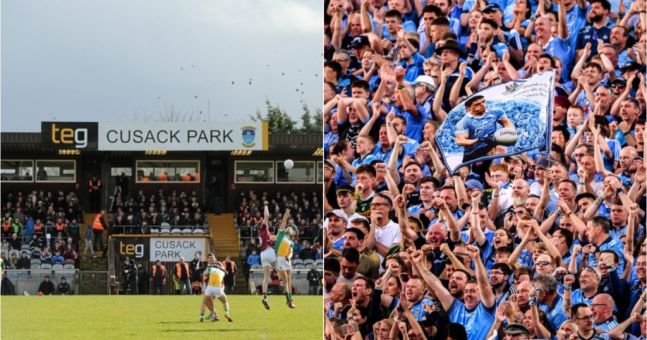 Westmeath Vs Dublin Needs To Be In Mullingar, For The Good Of Leinster Football

The All-Ireland final may have been played less than a month ago but the focus has already been shifted to 2020. The draw for the provincial championships has been ma...

It’s not the spectacle people are going for, there is no spectacle. The Sunday drinkers tag along during the summer because it’s a short bus trip

Better games in Croker in the league barely pull 25k

And Kk is no football town.
Also the tradition of LFinal day in Croker is still a factor, albeit increasingly diminished.
But the whole thing is a red herring now and has been for some time, it’s about a two-tier championship including a league/round robin element with the provincials about to be structurally sidelined to a much lesser part of the All Ire Championships.

I think they will end up as a virtual stand-alone thing. Anyway people constantly forget that during Dublin’s great 70s-80s era they mostly crushed all Leinster Oppo and Kerry did the same for longer in Munster. Meanwhile Ulster and Connaught were a brutal standard. Leinster final crowds back then were nothing like the late 90s-2009 era. Yet there was no crisis.

Also it needs constantly repeating to some, the other ‘problem’ with ‘Leinster’ per se is that the likes of Kildare and Meath especially have been so shite for so long. Absolutely nothing to do with Dublin.

Less than 15k for our opening double header this year with the home side taking on Meath in the opener. Abysmal really.

Lads it’s such a shambles that even our own supporters aren’t attending.

Times are changing, arguably people nowadays dont have time nor appetite for predictability in games. Your 99.9% guaranteed that dubs will win leinster, so its predictable, therefore country supporters wont bother travelling.

It’s so predictable that a large portion of our own are “hanging on till august”.

Theres a huge opportunity for the gaa to guarantee whatever income was made by provincial councils to at least guarantee that amount year on year for development in those provinces.

Open draw for teams in 8 groups of 4, winners of each group play in quarters and so on.

Open draw would guarantee a group of total death, and another of total devastation for 2 teams and a further group of 4 “weak” teams that will fancy their chances of a quarter final which right now is a million years away.

The reality is and I really take no comfort in saying it is those who are always languishing at the bottom will continue to do so, yet at the same time they feel it’s their right to have a crack at the big prize.

The appetite from the no hopers still wanting to have a go at Sam Maguire automatically renders 2nd tier comps redundant. The provincial set up at the moment is a 2nd tier conp.

Agree with all that, or…Meath and Kildare do what is necessary and achievable to compete much better. Not that it will matter so much at all once the champ structure takes that equation away.
It will be, as in effect it is now, about how many teams in Ireland can reach a serious competitive level.

how many teams in Ireland can reach a serious competitive level.

Floaters in and out of top 12 are cork, fermanagh, tip, clare, derry, down, Laois, wmeath.

Out of the 12, the top 4 could be beaten by anyone in top 4. The remaining 8 could spring a surprise on any team outside the top 4 (dub, kerry, Tyrone, donegal)

Not in top 12 at moment imo. But I have edited to post.

Mayo reached the semifinal this year, they are still in the top five and above the rest til we see what happens next year. They were clearly better than Galway this year.
Tyrone were no better than Mayo this year.

My idea is a movable feast. Go nuts!

I can see Monaghan dropping way back. Rossies be the others to fall back

They are still happy to piss off to america for a few bob as soon as they are in the qualifiers…or have to face dublin in leinster.

KK being a football town has no relevance really. If it was in any ground outside Croker it wouldn’t be full.

Walk-up is better in football stronghold