Uachtarán and Mr Duffy are apparently making a big announcement regarding the GAA at noon today. Speculation it will be on Championship structures.

Aidan O’Shea has a new hair do?

Does it get any bigger than that?

Aidos Diary to be read out before throw in on All Ireland Final day?

Stay tuned to GAA.ie for a big announcement today. Check out our Snapchat story for live coverage #GAA https://t.co/8fHlQcHYyu 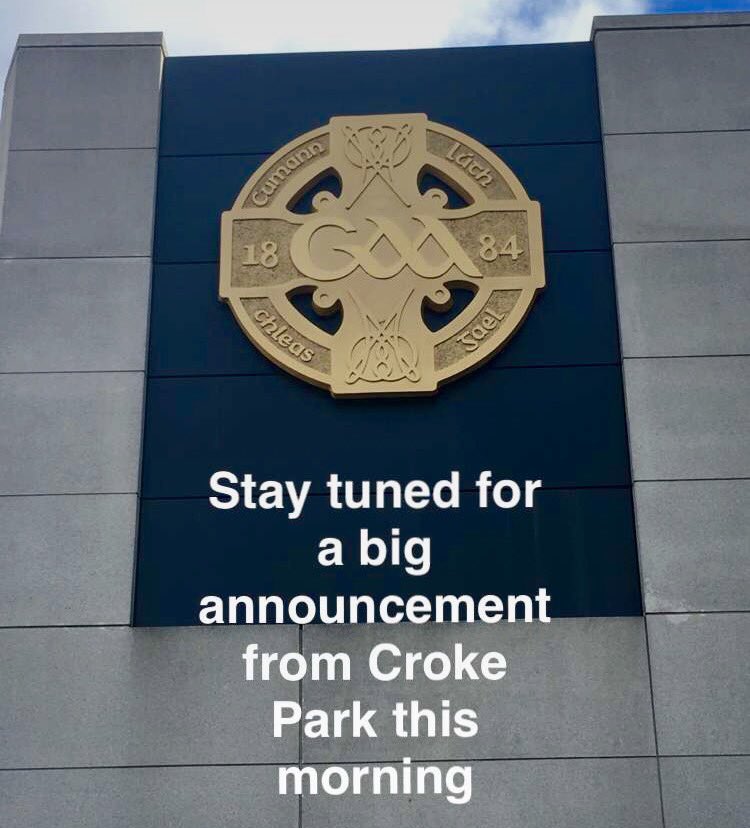 Croke park to be renamed The RBS stadium or somesuch

Aye - but maybe beginning a dialogue on it?

Aye - but maybe beginning a dialogue on it?

That’d hardly be worth a “big announcement.”

everyone’s definition of big is different …

The GPA couldn’t even get their document discussed last year. They’d be either very brave or very stupid to go on a solo run on this one. It would get people’s backs up.

Immediate reaction? More games for the better teams. more money for the GAA. Interferes with the club championships in counties where they actually play their championship during the summer. Championship is knock out till the quarters then you can in theory win one of three games in the group and still move to the semis.

I’ll have to think about this further but I’m not a fan.

So, more games for the top 8 teams?

At first glance it seems the priority is increasing revenue instead of a sensible structure. Munster teams will still play less games to get to an All-Ireland final than Ulster or Leinster. Will there be a lot of dead rubber games at the bloated quarter-final stage?

Some proposal all the same - and fairly out of the blue! Amazed it didn’t leak!! Just working through it and trying to think which of our esteemed posters they ‘borrowed’ it off!

I’ve not seen this proposal anywhere before. And the cynic in me thinks that they see a major issue with revenue this year in the provincials and are simply trying to claw it back. You can see it already in their refusal to open the hill for certain games. 8 more championship games than usual is a lot of money.

Cork and Kerry in particular won’t like it as they play championship through the summer and this will interfere in a big way with that. Dublin clubs who at least get some use of their club players for leage games between May and September will see that disappear in July and August. In theory round three of your “quarter final” groups could be dead rubbers and potentially if two teams on four points face each other in the third game you could have the unedifying spectacle of a team throwing a game in order the play what they may see as preferable opposition in an All Ireland semi.

Once again I’m afraid we’re tinkering for the sake of tinkering. This will do absolutely nothing for the counties who find themselves struggling and merely serve to increase the divide between “rich” and “poor”.

If they do get it through it won’t come in until 2018. The more I think about this the less I like it.

Al, instead of bringing the club championship back into the calendar year, just push it out past Paddys day - it will be irrelevant at that stage anyway