Horrible timewasting and diving from the 6th min onwards.

Was funny to watch how fast they recovered when suddenly they were chasing the game.

Every team does it, in fact last year I moaned about why Leeds werent “more professional” in closing out games. That said we played Wolves two years ago played them off the park, but a shot from if memory serves from Trarroe came off crossbar hit Mesiller in the back and went in. 1-0 up Woves and they time wasted from the moment of the goal which was around the 65th minute, thats taking the pi77

5 games & no defeats, get him a season ticket quick

Some goal by Tyler Robert’s tonight for QPR on his debut absolute cracker , could never see him scoring that goal for Leeds , maybe QPR is his level hope it works out for him , I was told no one off the pitch worked harder in the community than TR , so a decent guy it seems, deserves a bit of luck.

Maybe if he worked a little less harder in the community ….

Tickets the least of your problems , when is game going to be so many changed , KO , day etc , booking flights a nightmare

Too many memberships sold and they are still available to purchase on the site…I would have been able to buy 4 a few years back, but now thousands ahead of you to buy just one in the online queue…even if you are in Phase 1 (My Leeds Priority Plus members. )
The capacity being so limited means it is getting to be almost impossible unless you are a season ticket holder.

Dan James is available after suspension

Luis Sinisterra, Liam Cooper and Adam Forshaw have returned to training and are available.

Of the injured, it was reported he said, “We’ve had a lot more guys in training this week, so Adam, Liam and Luis have all entered training and all eligible for the weekend. Still, Junior is probably a couple of weeks behind, Luke is the same. Stuart Dallas I saw on the pitch today so that was an exciting moment for us.”

I would think 1 game would be plenty of penance for you unless it was a really bad thing you did to deserve a harsher punishment.

Good to hear Dallas back in training , that was some injury he had , sure hes a long way off playing but great to hears hes made it as far as the training pitch

When are you thinking of going over?
They are at home to Barnsley on 23 August in EPL Cup, might be a better chance to pick up a ticket

Southampton battered us 1-0 nil in this fixture last year , think one of the stats was Leeds didn’t have a shot on goal
They can play and depending on the journalist’s it’s either they’ve stopped playing for RH or there will be a bounce back from last weeks dire showing v Spurs
A win obviously tremendous away from home but I’d settle for the draw right now 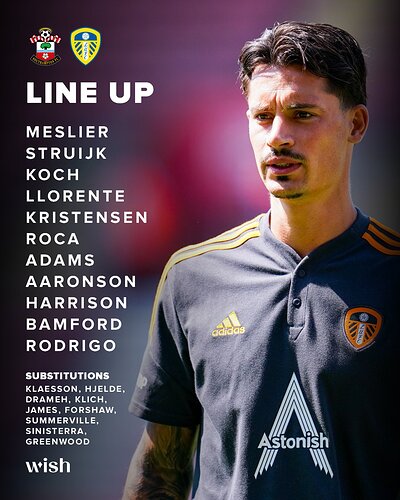 Gelhardt injured again…need for another striker is growing.