LMAO I’m not in Fairfield.

Nemo made it all way to the All Ireland Club Football Final a few years back so got to see him in matches online quite a bit then. We will see how effective his kickouts are or not.

That Cork defence is no match for Kerry attack. Kerry to win by 12-15 tomorrow and beat Tipp by 20+ in Munster final.

So tell us about this Cork defence? Haven’t heard of many of them.

Well obviously you’ve probably heard of Seán Powter. He was nominated for young poty in 17 when Con won it and hasn’t started a championship game since. He’s an excellent footballer and it’s fantastic to see him back for a big game like this. He’s wearing 2 but I wouldn’t surprised to see him further up the pitch giving the Kerry defence something to think about.

Shanley at 3 is making his championship debut, was on last years u20 panel. A very sticky defender by all accounts and could pick up Clifford. Some baptism of fire that would be.

Flahive missed the early part of the league with a shoulder injury but looked good against Louth, might go on Brosnan I’d say.

Kevin O’Donovan is on one wing and no I don’t mean Franks replacement I mean the Nemo lad. He’s had good club campaigns the last couple of years, good for a score and getting up the field.

Seán Meehan another championship debut, U20 last year and had a really good club campaign with Kiskeam this year from what I saw. Might take O’Shea, again not an easy task on your debut.

Taylor then is another lad who likes to attack and get up the field, good league campaign this year and scored a bit too.

Real focus on youth more or less in this team. 3 debutants at 3,6 and 11 which is a huge risk really. No armbands here just straight into the deep end which is a big ask. These guys like to all get forward but it’s stopping Kerry doing it will be their main issue. Nice to see the young lads get a go, no point going with your tried and trusted when they’ve achieved nothing. Cian O’Neill is with Cork this year too so I hope he’s able to bring another edge to the weekends performance.

I’m actually more upbeat about the footballers than the hurlers, not just this year but in general. Only time will tell but we could see Sam back here before we see Liam. 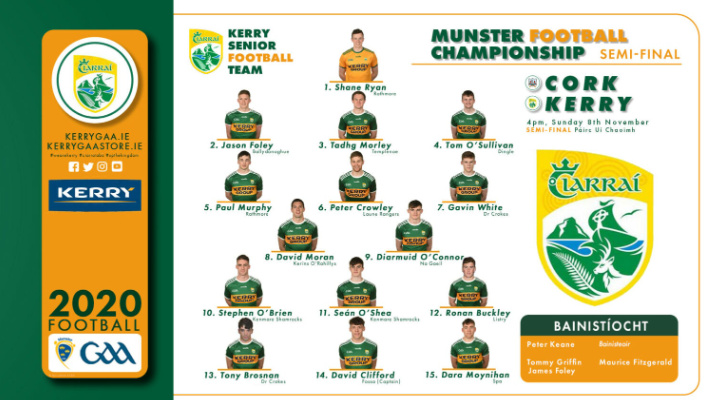 I’m hopeful that the Langers will at least show up and give the Keepers a bit of a fright. Anything else would be bonus time.

Limerick and Tipp on RTE news. Second half just started. Limerick winning 2-6 to 0-5.

Limerick getting cleaned out around the middle in second half and take off full and corner forward.

What an equaliser that was by Sweeney. Maurice Fitz eat your heart out

Typical Maurice Deegan. Missed 2 blatant pickups that should have been free in for Limerick. Some score by Conor Sweeney to equalise. Whoever wins will be hammered in the final.

Whoever wins will be hammered in the final.

RTE not showing extra time or what’s the story?

About ask same question. Mustn’t be

If this was a club match you would be disappointed with the standard.

Absolutely cat. Starting to wish RTE had decided not to show ET…