Next England head coach most likely

Next England head coach most likely

They’ll give it to Borthwick, most likely

O gara will hardly go to munster though

Do you think Mark McCall might be in with a shout? Maybe he’s happy enough (and paid enough!!) at Saracens.
If I was making the call for the RFU, I would give it Pat Lam.

They won’t give it to Pat Lam, his rugby can be effective but tends to get found out very quickly.

Not sure if they’ll go with McCall. Excellent CV for sure but not sure how popular he’d be with the old farts at the RFU. Just think they’ll go with an Englishman this time around. Borthwick and Baxter the obvious English candidates.

Doubt he’d want to go to any of the Irish provinces unless the IRFU told him he wouldn’t get the Ireland gig without it.

I think Lam did well at Connacht and is doing well at Bristol, without the resources of some of their competitors.
If they go with an English coach, Borthwick’s job at Leicester puts him to the front of the queue. But I think that he will probably have them playing a similar style to Jones.
Baxter is now Director of Rugby - or something like that - at Exeter. I think he might be too nice a guy to be considered.

Which of the three told you that?

With Lancaster going to France & Leo on a rolling one season contract, along with Sexton probably going after the World Cup, wonder if there’d be an opening in Dublin 4 for him soon?

SC with O’Gara for a WC cycle wouldnt surprise me.
ROG with a get out clause should Andy Farrell leave the emerald isle…

Bristol are owned by billionaire Steve Lansdown. They spent megabucks on big name marquee players back when English clubs were allowed two of them outside the salary cap. Lam isn’t a bad coach but he has one style. It can be effective but opposition teams eventually figure it out. Happened at Connacht and has happened at Bristol too who are bang ordinary these days. They’re in the Challenge Cup this season and currently 10th in the league. 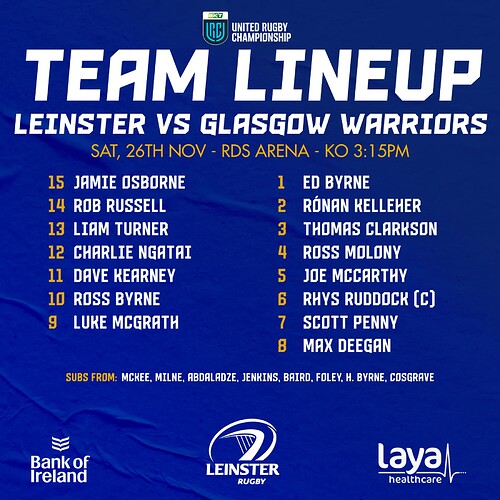 Bristol are owned by billionaire Steve Lansdown. They spent megabucks on big name marquee players back when English clubs were allowed two of them outside the salary cap.