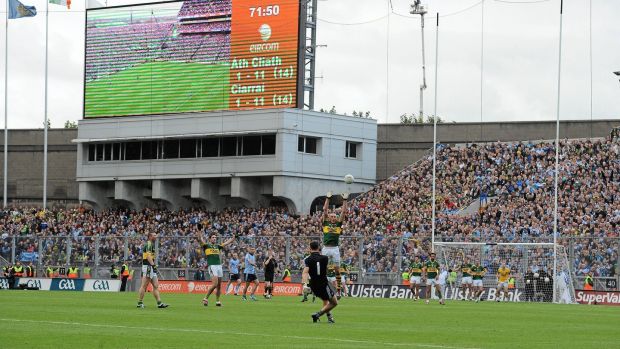 Hard to believe it’s now 10 years since that brilliant day.

The original match thread (now sadly lost in cyberspace) was one of the best ever in the history of ResDubs.

Some of the highlights around that time:

What a day! Was lucky enough to get 4 tickets from the club, 2 on the Thu night and another 2 in a 2nd allocation on the Fri night. Had got married the previous month and was just back from honeymoon, so the wife, brother, sister and me all headed into the game.

Seats were upper Canal End, towards the Hogan side, but would have sat on the roof to have been there that day. Met 2 club mates in the stand after the game, and we must have smelled onions from the burger stand, as we were a bit teary eyed!

Was having a few pints with my brother in Croker after the game, and he said I don’t think it has hit you yet. Dropped a programme into my father who happened to be in the Mater at the time, then walked into what was Smyth’s (Cross Guns Bridge) where Christy Dignam was playing an acoustic gig. He started playing Crazy World and it hit me like a ton of bricks/was blubbering like a baby. Great day

Picking up the ticket during the week of the game , meeting the mates in Berminghams on Dorset st for pre match pints ( we went there in 95 so decided this was a lucky pub) . The sense of all Ireland day feeling so differently to other match days. The Hill was bedlam for the last 11-12 mins , the eruptions for Kev Mac s goal, Kevin Nolan’s point, Bernard s point, flat for Stars equaliser and then the magic score , utter ecstasy. Post match in the hapenny inn . Magic day.

Amazing times, myself and 2 daughters headed home with no gaurantee of tickets but the resers turned up trumps and we got 2 hill through lads on here and then a stand ticket from another source, headed into town the night before to meet a mate and chatting to some kerry lads one of whom was prepared to take the stand for a hill and cash difference, we arranged to meet the next day in a hotel off O Connell, in fairness the kerry kept his word. I had not been in Dublin for a final since 83 and notices a huge difference, bunting all the way on bus trip from airport, massive banner of Berno covering a building on O Connell st, you really could get the sense of a big event taking place in the city, before I remembered the All Ireland final day as just being a GAA thing and the rest of the city paid little attention
Not much to say about the game, my memories would be why such madness when Kev Mc scored, it was like we had won, but I was thinking, ■■■■ we are still losing, another memory was a Kerryman behind who kept on mumbling" Back to the basics lads, back to the basics" it was comforting to see he was so nervous., The point, well the point was THE POINT, then course the shear outbreak of euforia, madness.
On a sour not, got turned away from a bar next to blooms hotel, forget the name, bouncer said no football jerseys, I simply could not imagine that happening in any other county in Ireland on the night they win the All Ireland, I often think of that when we get the population arguments etc…, a huge % of our population could not give 2 fucks about GAA . After the game I text the kerryman who gave me the ticket to off comisserations, he never replied.

On the day, the ripple thru the Dubs crowd when the lads were shown on screen for the first time, waiting to run out the tunnel.

Same match memories as others mentioned above.

Afterwards, the lads sitting in the centre circle, never wanting the moment to end…

Was in 301 with the three bros. So got the best of the Hill, the roof shaking above and pole position for the goal. One of the bros was reading one of the many publications that came from that game and there is a pic of Maxi’s goal and he noticed the four of us in the background. So that is now joined my the main pic on canvas with an appropriate ode and signed by the great man himself.

Showed it to some non-GAA heads in the office.

They were in stitches.

Best day of my life. Ever.

Was on the Hill with the missus. Got her last minute ticket through the club. Couldn’t watch Cluxco taking the free. Turned my back and will never forget the roar when ball went over. Kevin Mc goal, Kevin Nolan point, MDMA slicing ball wide on 21 to seal game, Diarmuid Connolly composure in last 10 minutes when wasn’t playing well before and course Cluxton will stand out. Will forget never the sing song in front bar in Meaghers after.

Dooooooomed!!
Well, it had to work one time…

I felt that my article in Blue&Navy magazine earlier that summer which set the All Ireland run as an adaptation of The Sting with Kerry/JOC filling the role of baddy Lonnegan was a fairly inspired bit of Mystic Meg.
Pity nobody ever read my contributions, doh!

Of the day itself I recall having a Nally terrace ticket, the dreathar was in Dineen, a bunch of cosmically cocky Kerry lads behind me wrecked my head especially after we lost the mínúir in tragic fashion, so I finally plucked up the courage to hop the fence into The Real Hill. BEST move I ever made!

I always feel with finals, seeing as we’ve been in a few (

), it’s the moments when everyone’s leaving the pub, or wherever one might be leaving, and making the march to the ground, that I am most nervous, and a bit sad to be leaving behind all the fun and excitement of the long build-up to the final and the hours before it.

The day just goes too damn quick! Also then the silence before the anthem, the throw in, and the roar that goes with the throw-in, all heart-quaking stuff.

The hill rattled when cluxtons kicked it over. The shock of it.

Hard to put into words the scenes when the final whistle went. All the years of hope and failure following the team around the country was all worth it that day.

The time from the Kev Mc goal to the winning point was a blur. I must’ve watched them back a million times since. What a day

Aye. Other than Kerrymen.