Anyone else getting plagued with Scam calls, seems to be rampant and getting smarter. Its gotten to a stage now you cant answer the phone to anyone outside those in your contacts already.

@NatalieORegan1
Scam phone calls are getting smarter. Apparently there is a warrant for my arrest because of a hit and run in my car. ( I don't drive) they just need my address and PPS number 😂😂 If you have a warrant then you have my address, come knock at my door. https://t.co/98cYCu0esy

Getting an average of 5 a day. Numbers made to look very close to my own number. Have never answered them.

I have a second work phone that nobody has ever been given the number for (it’s only for data). That one also getting 5 calls/txts a day.

In fairness, I don’t answer the phone to people I do know, never mind ones I don’t. It pays to be an introverted arsehole sometimes

I was getting them but not recently. I don’t answer them.

Don’t answer any number I don’t recognise. If it’s someone genuine they can leave a message

Getting loads, very close to all mobile numbers we use in work, they need to up their game saying their from the department of revenue with a big yank accent though!

I had a call yesterday supposedly calling from Microsoft. Decided to play along. Have good IT background so started asking some technical questions to help us understand fully the issue we were dealing with

. After couple of minutes think he lost the will to live and hung up!

Got another call couple of mins later which started by asking did I speak English? I answered oh yes I do and I love it and strangely she hung up on me!!

Lot of calls recently. One last week claimed my PPS number was being used fraudulently and would be cancelled if I didn’t respond. That was actually an automated voice message left! So obviously sophisticated enough scam group targeting Ireland at the minute. With accents involved would expect they’re based outside Europe.

I got 5 robo scam callers today all from department of social protection. Just hung up after the first word aftet the first call. Amazing they can get so many 085 etc numbers to create the calls.

Was getting a spate of calls from numbers very similar to my own (same prefix and 4 of the 7 digits in the number) All computerised voices claiming to be from DSP. Blocked each number.
Now getting text messages, claiming to be from An Post, DPD or DHL, about my delivery, and a link to click on. Needless to say I haven’t clicked!

Yeah like the comments above , I don’t answer and block but this one I missed Googled the number and Garda HQ came up, was like what do they want, then the mind wandered a bit, checked in with Missus and the auld fella make sure everything alright, can’t really block that number it’s legitimate but cloned.

Everyone is Ireland seems to be getting these calls. All they are after is one person, some elderly person, gives them something

Don’t answer any number. If it’s genuine, I don’t give a shite.

Fixed that for you.

I’ve not been able to get through at all lately when trying to call the spam-callers back. Are they avoiding me?? 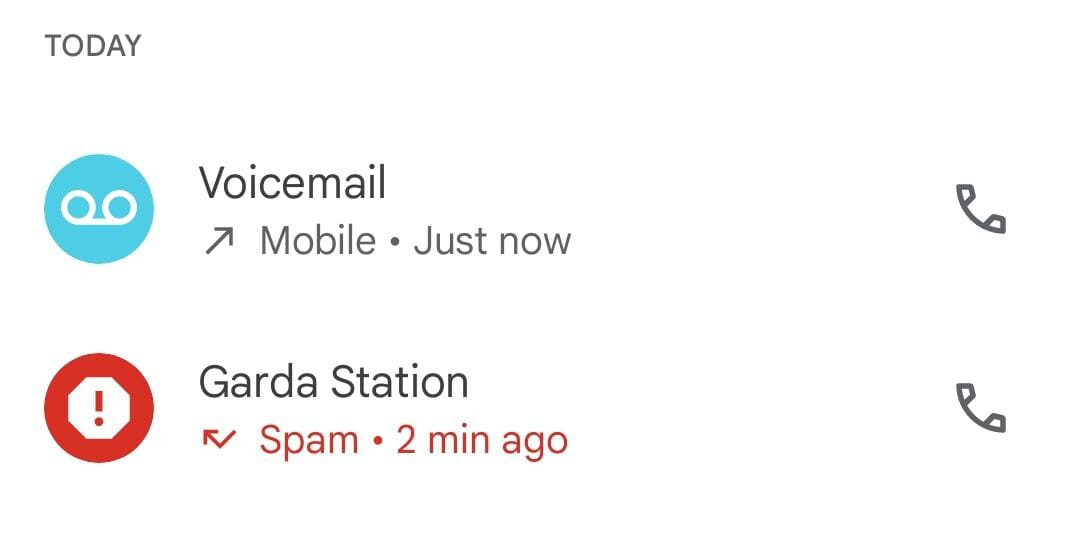 Just got one now. I didnt answer and let it go to voicemail. Voicemail was the automated voice.

Just had one and, for the first time, stupidly answered it. The number was “Dublin” - something-something-666-0000.

Had a total brain-freeze, as expecting a Bosch call out today or tomorrow to fix dishwasher, and answered it. A recorded message started to blab about my bank account being frozen.

It’s really irritating. My elderly mother had a bad fall in the middle of the night two weeks ago and called me at 5am. But my phone was on silent because of these calls at all hours.

So my mam called my clontarf-based sister and she too had her phone off because of spam calls. Thankfully she then got my other sister in malahide to come down. It was a serious fall and an ambulance was needed.

), but there can be repercussions to these bloody spam-calls besides mere irritation.

Sorry to hear that @Roman and glad your mam is on the mend. It’s a side effect of these things that you wouldn’t think of.

Glad your mother is ok and on the mend @Roman.

Have a look at Do Not Disturb option on your phone. You can schedule it to come on between certain times but allow numbers that you marked as favourite to come through though.

Firstly, all the best to your mam, good to hear she’s recovering. The spam calls have gone out of control, coupled with texts the puzzle palace need to get working on this. There was a trend for changing the last three digits of your number a few weeks ago. That seems to have abated. Keep vigilant.

Have a look at Do Not Disturb option on your phone. You can schedule it to come on between certain times but allow numbers that you marked as favourite to come through though.

Great. Had no idea there was such an option. Will look into that. Thanks man.

Good that all is well with your mother.
I haven’t got 1 of the calls for about 10 days, for about a week before they stopped I answered the phone but I didn’t say anything and their calls remained silent so I assume the tape is voice activated and by me remaining silent their tape wasn’t activated. I did that for a week or more every time a strange number rang so it may have worked cause its at least 10 days since I’ve got a call. Give it a try it may work

Neither had I. That’s why I was kicking myself for answering today - especially with such a giveaway number (-666-0000).

What I’d been doing, was ignoring and letting them ring out. (They could leave a message if real). If no message left, I’d block the number and delete.

But I’ll try your solution, if mine no longer works (assuming they’re about to kick off again).